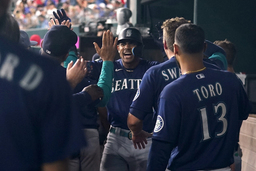 ARLINGTON, Texas (AP) Reigning AL Cy Young Award winner Robbie Ray doesn't recall being part of a run quite like what the Seattle Mariners are on these days. Everything is a new experience in the big leagues for All-Star rookie center fielder Julio Rodriguez, and he just keeps doing impressive things.

Ray struck out 12 without a walk over 6 2/3 innings before Rodriguez hit a emphatic grand slam as the Mariners extended their longest winning streak in more than two decades to 12 games with an 8-3 win over the Texas Rangers on Friday night.

"He doesn't let the moment be bigger than it is and in that situation," Ray said of the 21-year-old outfielder who played his 89th game in the majors.

Rodriguez hit his first slam on a full-count pitch with two outs to straightaway center for his 16th homer, and finished with a career-best five RBIs. His run-scoring single in the fourth put the Mariners ahead 3-0.

"Tonight was more of our typical formula, dominant starting pitching," manager Scott Servais said. "We got some big hits tonight, no question about it. Talk about Julio, that is as good as at-bat against a quality bullpen arm. ... The looks in our dugout when that ball went over the fence, was like, did he just really do that? But he's a special player."

After Seattle loaded the bases on a single and two walks by reliever A.J Alexy to start the eighth, Jose Leclerc struck out back-to-back batters, but was unable to get a third strike past Rodriguez.

"We fought, we got within a run, you could feel the momentum. We were one pitch away from, that whole eighth inning, the bottom of the eighth changes," Rangers manager Chris Woodward said. "It's heartbreaking. But like I've said many times this year, we've got to bounce back and come back tomorrow."

The only time the Mariners had a longer winning streak was their team-record 15 in row in 2001, their last playoff season. They have won 20 of their last 23 games overall. Atlanta has the only longer streak in the big leagues this season with 14 consecutive wins last month.

Eugenio Suarez doubled and scored Seattle's first run in the fourth. His sacrifice fly an inning later made it 4-0 before Corey Seager and Leody Taveras homered for the Rangers.

Ray (8-6) matched his season high for strikeouts while allowing three runs, on those two Texas homers. It was his 15th game since the start of 2021 with at least 10 Ks, tied with Milwaukee's Corbin Burnes for the most in that span. Ray had 10 such games last season when the lefty won the AL Cy Young Award while pitching for Toronto.

"That's probably the best I felt all year. I felt like everything was working really well for me," said Ray, who after Seattle's four-run third struck out five Rangers in a row. "When your team puts up a crooked number, you go out and attack, attack the zone and try to get back in and get some more runs."

Seager's 22nd homer came a day after being added to the American League All-Star team and the Home Run Derby. He will face Rodriguez in the first round of the derby next week at Dodger Stadium, which was Seager's home his first seven big league seasons before going to Texas in free agency last winter on a $325 million, 10-year contract.

That two-out solo shot in the sixth was Seager's seventh homer in the past 10 games, and extended his career-best RBI streak to eight games. His career high for homers is 26 in 2016. Taveras hit a two-run homer in the seventh to cut the deficit to 4-3.

ONE HOP, NO HOP FOR OUT

Mariners DH Justin Upton was thrown out trying to score from second base on the single by Rodriguez in the fourth. Elier Hernandez, playing only his second game in the majors after more than a decade in the minors, fielded the ball on one hop in shallow left field and made a direct in-air throw that allowed catcher Jonah Heim to make the grab and tag out Upton in one motion.

Mariners: SS J.P. Crawford was out of lineup for the second game in a row since bruising his right index finger during a doubleheader Wednesday at Washington. Servais said the finger only really limits Crawford throwing, and that he could be available to hit.