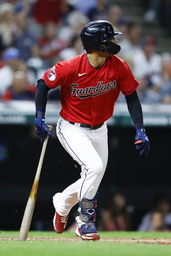 CLEVELAND (AP) Josh Naylor drove in two runs and Andres Gimenez delivered the go-ahead single in the seventh inning, lifting the Cleveland Guardians to a 6-5 victory over the struggling Detroit Tigers on Friday night.

Gimenez, a first-time All-Star, hit a two-out flare to left field off Michael Fulmer (2-4) that scored rookie Steven Kwan from second base. One batter earlier, Naylor knocked in Myles Straw with a sacrifice fly to tie it 5-all.

"That's who we are; we try to get people on base and try to put pressure on the other team," said Gimenez, who has a .384 batting average with runners in scoring position. "Today was a good example of what we're capable of doing, what we're going to try to continue doing."

Bryan Shaw (4-1) tossed two scoreless innings and Trevor Stephan worked the ninth for his second save. Cleveland closer Emmanuel Clase, whose 19 saves are tied for most in the AL, was unavailable after pitching the previous two days.

Enyel De Los Santos, Shaw, Eli Morgan and Stephan did not allow a run in 5 1/3 combined innings of relief.

"These are growing experiences for those guys in some different situations," Guardians manager Terry Francona said. "That's great because when you use everybody, it's a real good win for us."

Prized rookie Riley Greene homered and tied his season high with three RBIs for the Tigers, who have lost seven of eight and tied their low-water mark of 17 games below .500. Harold Castro had two doubles and a single.

"It's a tough loss, but we're not a victim," Detroit manager A.J. Hinch said. "They did a better job than we did completing at-bats."

Greene hit a solo homer in the third to pull the Tigers to 3-1, then gave them a 5-3 lead in the fourth with a two-run double off Zach Plesac. Detroit scored four times in the fourth, with Harold Castro and Willi Castro driving in the first two.

Greene, who made his major league debut on June 18, has three multi-RBI performances in 26 games with the Tigers. All three have come against Cleveland, along with two of his seven two-hit games.

"Riley had an excellent bounce-back game, which is a great lesson to take away," Hinch said. "He hit the ball really hard and swung the bat well."

"Andres is a multiple-threat player who lives up to big moments," Plesac said. "He's a guy you want up in those situations. It's always good to see that dude come through."

Tigers starter Drew Hutchison gave up four runs over five innings in his second outing against the Guardians in 11 days. The right-hander is 1-0 against Cleveland and 0-4 against the rest of the majors.

Plesac matched his shortest outing of the year at 3 2/3 innings, allowing five runs, three of them unearned because of an error by Ramirez at third base. The right-hander is winless since June 5 against Baltimore, a span of seven starts.

Tigers RHP Alex Faedo, who is on the taxi squad, has been shut down with a sore right hip and will be examined by a specialist. The rookie lasted only 1 2/3 innings Monday in his start at Kansas City. "Any time you start seeing specialists and are flying around the country, it's never a good sign," Hinch said. Detroit's first-round draft pick in 2017, Faedo earned his first big league victory at Cleveland on May 22.

Tigers: RHP Jose Cisnero (right shoulder strain, swollen Achilles) was activated from the 60-day injured list and transferred to the bereavement list. Cisnero was in Cleveland, preparing for his season debut, when he received word of a family emergency.

Guardians: RHP Aaron Civale (right wrist sprain), who exited his start Wednesday against the White Sox after one scoreless inning, will undergo a CT scan this weekend before consulting with an orthopedist. Civale is on the IL for the second time in 2022.

Tigers: RHP Michael Pineda (2-4, 3.58 ERA) makes his fourth start after missing six weeks with a broken right middle finger. Pineda is 1-2 with a 4.11 ERA since returning on July 1.