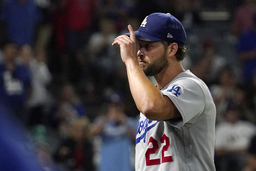 ANAHEIM, Calif. (AP) Clayton Kershaw's pitches all sizzled from the start, and the Los Angeles Angels swung early, often and usually ineptly. Behind their longtime ace, the Los Angeles Dodgers made one stunning defensive play after another.

While he retired the first 21 Angels in order, even Kershaw allowed himself to admit everything was pointing toward his first perfect game.

Luis Rengifo's double leading off the eighth ended the dream, yet it scarcely dampened another spectacular night for the Dodgers' beloved left-hander.

Kershaw finished his latest gem in a career full of them with eight scoreless innings of one-hit ball in the Dodgers' 9-1 victory over the Angels on Friday night.

After mowing down the Angels for seven innings, Kershaw (7-2) fell six outs short of his first perfect game and the second in Dodgers franchise history when Rengifo lined a clean hit to left on a well-thrown low slider.

"I really wanted to do it," Kershaw said. "I think it would have been really fun for everybody involved."

But Kershaw shrugged it off, retired three more Angels and got the last of several standing ovations from a sellout crowd of 44,648 at the Big A, which contained a huge contingent of blue-clad fans roaring for Kershaw's every out.

"Honestly, I probably should have given up four or five hits," Kershaw said. "Defense played unbelievable tonight, and they lined out right to some guys. It was a fun night."

The 34-year-old Kershaw was selected to his ninth All-Star team earlier this month, and he is a strong sentimental candidate to start the Midsummer Classic at Dodger Stadium.

If anybody still doubted his All-Star worthiness after just 12 starts this season, Kershaw again showed he's a master craftsman on the mound who can dominate major league hitters. The three-time Cy Young Award winner struck out six and induced 11 swings and misses while throwing just 89 pitches - none faster than 92.5 mph.

"Obviously, he's still one of the best in the game," catcher Austin Barnes said. "He puts the ball where he wants it. They were swinging early, which helps him. After the third or four incredible (defensive) play, I thought it was going to happen. But it's tough. It doesn't happen very often."

Justin Turner had three hits, drove in four runs and also made the first of three spectacular defensive plays by the Dodgers' infield to keep Kershaw's perfect game intact. Will Smith went 4 for 4 with a walk, while Hanser Alberto had a two-run triple in the fifth inning as the Dodgers rolled toward the All-Star break with 13 wins in 15 games.

Turner, Alberto and Trea Turner all made outstanding plays on grounders in a four-inning span to maintain Kershaw's perfection.

"That was a vintage Kershaw performance," Justin Turner said. "There's a point in the middle of the game where you know what's going on, and we had a really good feeling about it. That was dominance right there."

Brandon Marsh homered off Reyes Moronta in the ninth for the Angels, who opened the second half of the annual Freeway Series with their 11th loss in 13 games overall. Mike Trout sat out for a third consecutive game after having upper back spasms Tuesday, and the rest of the Angels couldn't break through.

"He's a future Hall of Famer, and he had his best stuff working tonight against a team that hasn't been swinging the bats very well," Angels manager Phil Nevin said of Kershaw. "You could tell from the beginning he had a few pitches that were really working for him."

Patrick Sandoval (3-5) yielded seven hits and two earned runs while failing to get through the fifth inning for the Angels.

Kershaw already flirted with history in his first start of the season, throwing seven perfect innings with 13 strikeouts at Minnesota on April 13. Los Angeles manager Dave Roberts pulled Kershaw from that start with the lefty's reluctant approval.

Kershaw is the only pitcher in the post-1961 expansion era to be perfect through seven innings more than once in a season, according to the Elias Sports Bureau.

Trout intends to play Saturday and in the All-Star Game on Tuesday. He said he took this game off "to make sure it has completely gone away."

"Still felt a little not right," Trout added. "I feel like treatment went good today, and (I'll) be in tomorrow. I'll see how I feel tomorrow, but my intention is to play tomorrow."

Freddie Freeman played his first game at Angel Stadium since his rookie season. The longtime Atlanta slugger is an Orange County native who grew up 10 minutes from the Big A and attended countless games here as a kid.

Freeman continued his phenomenal stretch at the plate since being left off the NL All-Star team when he drove in the Dodgers' first run with an RBI single. The slugger reached base for the jaw-dropping 18th time in his last 21 plate appearances with the first-inning hit.

Dodgers: LHP Andrew Heaney is likely to make a rehab start Saturday. He has pitched for LA once since April due to shoulder woes.

Angels: RHP Jimmy Herget will start a rehab assignment after the All-Star break. He's been out since June 22 with a right shoulder impingement.