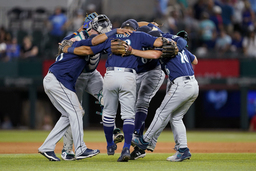 ARLINGTON, Texas (AP) Ty France hit a two-run single in the eighth inning as the Seattle Mariners rallied from a four-run deficit and beat the Texas Rangers 6-5 on Thursday night, extending their winning streak to 11 games.

The Mariners have gone 19-3 since being 10 games under .500 on June 19 and have moved into the AL wild-card race. The winning streak has featured six one-run games, plus an extra-inning victory.

The Mariners trailed 5-1 going to the seventh inning before tagging Texas' bullpen for two runs in the seventh and three in the eighth. Up to that point, Seattle's only run came on No. 9 hitter Sam Haggerty's inside-the-park homer in the fourth inning.

Matt Festa (2-0) pitched a perfect seventh inning and earned the win. Diego Castillo stranded runners at first and second in the ninth inning and picked up his sixth save in six chances.

Haggerty had his fourth career four-hit game and his second in 10 days.

"You just feel like you can win every game at some point, and we're kind of on one of those stretches," Haggerty said. "I don't believe anybody in the dugout felt for a moment that we didn't have a chance to come back."

Corey Seager, added to the American League All-Star team and the Home Run Derby earlier Thursday, had a double and two RBIs for Texas, which is 4-3 during a 10-game homestand, its longest of the season.

"A gut punch," Rangers manager Chris Woodward said. "We've had a few of them."

Texas starter Martin Perez allowed one run on three hits, and matched a career high with nine strikeouts before being pulled after five innings and 102 pitches. Perez sought his eighth straight win.

Seattle starter Marco Gonzales gave up all five runs on a season-high 11 hits, one short of his career high. But reaching the sixth inning helped a bullpen coming off a Wednesday doubleheader at Washington in which relievers threw 12 total innings.

"We know who we are; we know how good we are," Gonzales said.

Haggerty's homer in the fourth inning was a liner to shallow center that skipped past Leody Taveras and bounced to the wall. It was the second inside-the-park homer at Globe Life Field in four games. On Monday, Rangers rookie 3B Josh Smith had one under near identical circumstances involving Oakland CF Ramon Laureano.

"I hit third base, and it just felt like I hit quicksand," Haggerty said.

Elier Hernandez made his big-league debut as Texas' DH after having his contract selected from Triple-A Round Rock. The 27-year-old singled in his first at-bat, scored, and singled again in the sixth.

Texas RF Adolis Garcia singled in the first to end an 0-for-18 skid. . Heim had two doubles and Taveras two singles for Texas. . The Rangers optioned OF Steven Duggar to Round Rock to make room for Hernandez on the roster. . Servais said RHP Chris Flexen will start Sunday's series finale on short rest on the final day before the All-Star break.

Mariners SS J.P. Crawford was scratched from the original lineup with a finger injury and is day to day.

Friday night's game will match Mariners LHP Robbie Ray (7-6, 3.51 ERA) against Rangers RHP Taylor Hearn (4-5, 5.86). Ray has allowed only four earned runs in 39 2/3 innings in his last six starts. Hearn, added to the taxi squad on Thursday, most recently pitched for the Rangers on June 25 and started twice for Round Rock since then.