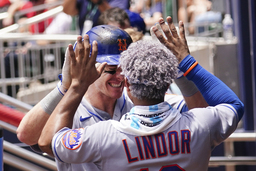 ATLANTA (AP) The New York Mets won two of three in their NL East showdown with the Atlanta Braves despite playing without two of their four All-Stars.

It helped that Francisco Lindor played like he should be included at the Midsummer Classic.

The first-place Mets stretched their lead over the Braves to 2 1/2 games.

"Selfishly, I'd like to see him get four days off because he plays almost everyday, but you could make a real good case for him going to the All-Star Game, too," said Mets manager Buck Showalter before adding he "hasn't heard a whimper" from Lindor on the subject.

The Mets were without All-Star second baseman Jeff McNeil (paternity list) and outfielder Starling Marte (groin tightness) in the series.

Lindor refused to place too much importance on winning a series against the defending World Series champion Braves, the four-time reigning division champions, at this point of the season.

Lindor said beating Atlanta in the postseason "is when it counts."

Eduardo Escobar and Mark Canha also homered for the Mets.

Eddie Rosario had three hits, including one of Atlanta's three homers - all solo shots.

Bassitt (7-6) improved to 5-2 in eight road starts this season by allowing one run on five hits with six strikeouts and two walks.

"We had three really good starts against us, and we didn't handle them, pretty much," Snitker said. "... We're going to play them a lot more, but they're going to get guys back, too. They were without two or their regulars."

"I didn't think he was real sharp," Snitker said.

Escobar's 10th homer carried 426 feet above the Chop House restaurant in the right field stands, giving the Mets a 1-0 lead in the second.

New York pushed the lead to 4-0 in the third on Lindor's three-run homer, his 16th, also to right field. Lindor's blast followed Morton's walk to Tomas Nido and a single by Brandon Nimmo.

Canha opened the sixth by lining his seventh homer over the left field wall.

The Braves had baserunners in each of Bassitt's six innings, but the right-hander had answers for every challenge in the first five. The Braves had runners on second and third with two outs in the fourth, but Adam Duvall's grounder to Lindor at shortstop ended the threat.

Bassitt threw five scoreless innings before Matt Olson led off the sixth with his 15th homer. Austin Riley added his 25th homer off Drew Smith in the eighth. Rosario led off the ninth with a homer off Tommy Hunter.

Robinson Cano, making his second start at second base since he was acquired by Atlanta for $1 in a minor league deal with San Diego, had one hit, a seventh-inning single.

Morton allowed three homers for the third time in his career and the first time since April 14, 2010 with Pittsburgh at San Francisco. He walked at least three batters for the ninth time in 18 games started this season.

Braves: RHP Darren O'Day (strained left calf muscle) was placed on the injured list, retroactive to Tuesday. The move opened a roster spot for the return of RHP Kenley Jansen (irregular heartbeat), who missed 15 games. Jansen is expected to immediately reclaim his job as the closer, but he pitched a perfect eighth in his first outing since June 26.

Mets: RHP Jake Reed was claimed off waivers by the Los Angeles Dodgers.

Luis Guillorme delivered a run-scoring double in the seventh as he hit cleanup for the first time in his career. Showalter sought a new way to build a lineup without McNeil, Marte and C James McCann (left oblique strain). Guillorme has two homers this season and four over 242 career games.

"It's kind of where we are with some of our guys who aren't here," Showalter said. "I'm just trying to be constructive for our players."

Showalter hopes to have McNeil and Marte back as soon as Thursday.

Braves: RHP Kyle Wright (10-4, 2.97) will face RHP Anibal Sanchez, who will be making his 2022 debut, when Atlanta plays against NL East rival in the opener of a four-game series at the Washington Nationals on Thursday night. Wright is 2-1 with a 6.27 ERA in five career games, including three starts, against Washington.