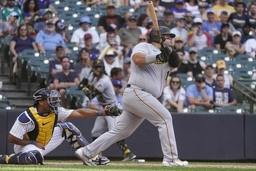 MILWAUKEE (AP) Touted rookie Oneil Cruz hit a tiebreaking homer in the sixth inning and Daniel Vogelbach added a three-run shot in the ninth to power the Pittsburgh Pirates to an 8-6 victory over the Milwaukee Brewers on Sunday.

Michael Chavis and Ke'Bryan Hayes also went deep for the Pirates, who took two of three in the series from the NL Central leaders.

"We were able to get the ball up in the air on a day that was advantageous because it was warm," Pittsburgh manager Derek Shelton said.

Andrew McCutchen had a two-run homer in the ninth for the Brewers against his original team.

Chavis snapped an 0-for-10 skid and tied it 4-all with a leadoff homer in the sixth off Trevor Gott (1-2), who had just replaced starter Eric Lauer. Two outs later, the 6-foot-7 Cruz connected for his fourth home run of the season.

Vogelbach made it 8-4 with his drive off Chi Chi Gonzalez.

"I think every game is an individual story," Brewers manager Craig Counsell said. "We gave up some runs today. Trevor gave up a couple of homers, obviously, and then we couldn't get out of the ninth. We were at the point with the rest of the guys where I wasn't going to use them in a `down' game. That's kind of where we're at today."

In a matchup of two lefty starters, neither Lauer nor Jose Quintana made it past the fifth inning.

Lauer struck out nine and gave up one run over six innings in his previous start, but needed 57 pitches to get through the first two innings this time.

Pittsburgh took a 1-0 lead with three straight singles in the second.

The Pirates extended their lead to 2-0 in the third. Hayes, who doubled, scored on a passed ball, a 94 mph fastball that glanced off the mitt of Pedro Severino, who made his second appearance of the season after serving an 80-game suspension after testing positive for a performance-enhancing drug.

After Hayes' double, Lauer retired eight straight batters until Hayes returned to the plate in the fifth inning. Lauer slapped his glove just as Hayes connected on a solo home run that gave Pittsburgh a 3-2 lead.

The long ball has hurt Lauer. He has given up 18 homers, including 10 in his last six starts, after allowing 16 all last season.

The Pirates were able to overcome a short outing from Quintana.

Milwaukee tied the game at 2 in the third after Jonathan Davis singled, then advanced to third with a stolen base and a throwing error on the play by catcher Jason Delay. Mike Brosseau and Luis Urias each had an RBI single.

Quintana was chased in the fifth. Davis led off with a double and tied the game at 3 when he scored on Adames' double, which fell near the right-field line. Pittsburgh challenged, but the call on the field was upheld.

Milwaukee took a 4-3 lead on a sacrifice fly by Urias off winner Chris Stratton (5-4), who replaced Quintana in the fifth.

It was Pittsburgh's first road series win since sweeping a three-game series against the Dodgers from May 30 to June 1.

Pirates: CF Bryan Reynolds left after six innings with discomfort on his right side. "He was able to play defense unrestricted, but just didn't want to test it in an at-bat," Shelton said.

Brewers: Fans received a bobblehead of RHP Freddy Peralta, who is on the 60-day injured list with a right shoulder strain. He could return in August.