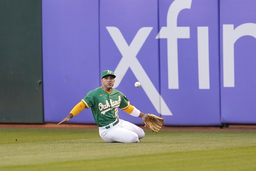 Alex Bregman hit a two-run homer and Martin Maldonado connected for a three-run drive on a night when every Astros starter had at least one hit, including three by Yuli Gurriel. Houston outhit Oakland 14-4 and won for the 10th time in 11 games.

Jose Altuve, selected an All-Star for a franchise-record eighth time, went 1 of 4.

The Astros have rallied to win in five of their last six games.

"You get knocked down a lot in this game and you have to get back up right away and turn the page and move forward," Bregman said. "Our guys did a really good job of resetting, refocusing and getting back in there and getting us a lead. And Urquidy did a great job of keeping them there after we did that."

Elvis Andrus homered for the A's, a major league-worst 28-57.

The American League's leader in run support, Urquidy (8-3) was mostly dominant in his first career win in six tries against the A's. He retired 11 straight and 14 of 15 following Andrus' sixth home run this season.

Urquidy dodged potential injury when he made a quick snag of a 92 mph comebacker from Cristian Bethancourt for the final out of the fourth, a play that left Uquidy squatting on the mound for an extended moment.

"I was attacking the zone and I was throwing strikes early in the count, That helped me a lot," Urquidy said. "We have a lot of talent here and in most of my games they hit a lot. It's something very, very comfortable for me."

"He's been good the last four or five starts," Astros manager Dusty Baker said. "They were putting the ball in play and sometimes soft contact is the way to go. The more strikeouts you get, the more pitches you have to throw. They were swinging the bat and they weren't doing a bunch of taking. It worked for Urquidy and for us."

A's starter Paul Blackburn retired his first 10 batters before Aledmys Diaz and Yordan Alvarez hit consecutive one-out doubles in the fourth. Bregman then connected on Blackburn's next pitch for his 11th home run and a 3-2 lead.

Maldonado, who struck out swinging in his first at-bat, crushed a 78 mph slider that Blackburn left on the outer middle in the fifth.

"They're a big part of our offense," Baker said. "We get those two guys going then we'll really start rolling."

Blackburn (6-4) allowed six runs in four innings. He is winless in five career starts against the Astros.

Astros: OF Michael Brantley (right shoulder) is taking a cautious approach to his rehab. Out since June 27, Brantley ran before the game and is feeling better. . Catcher Jason Castro (knee) is still sore and has yet to resume baseball activities. . INF Jeremy Pena is out of health and safety protocols but was not available to play.

Astros LHP Framber Valdez (8-3, 2.67 ERA) faces Oakland for the second time this season Saturday. Valdez dominated the A's on May 30, pitching a complete game two-hitter. LHP Zach Logue (2-4, 5.47 ERA) will be called up from Triple-A Las Vegas to make his sixth start of the season for the A's. Logue is taking the turn of Frankie Montas, who left his previous start with shoulder tightness.