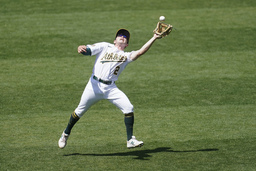 OAKLAND, Calif. (AP) Bo Bichette hit a tiebreaking solo home run in the eighth inning and the Toronto Blue Jays rallied past the Oakland Athletics 2-1 on Wednesday to snap a five-game losing streak.

"We needed it," Bichette said. "I think when you're trying to stop a skid, sometimes that's how it goes, so I thought we fought well today and definitely excited to get the win."

Matt Chapman also homered against his former team for the second straight day. Chapman spent his first five seasons in Oakland before being traded to Toronto in March.

Ramon Laureano homered for the A's, who failed to complete their first sweep of the season.

"We've played well against the Blue Jays team this year," Oakland manager Mark Kotsay said. "Unfortunately, we didn't get the win today to get our first sweep and to get our season series to win, but we've still got games in front of us."

Laureano's sixth long ball of the year broke a scoreless tie in the bottom of the sixth. Chapman answered with his 13th in the top of the seventh before Bichette hit his 13th an inning later.

"It seems like every time that (Bichette) hits a home run, it's to go ahead or tie a game," Toronto manager Charlie Montoyo said. "It was good. Hopefully, that gets us going offensively again."

"(I was) feeling pretty good," Berrios said. "I was able to go out there and compete and give our team a chance to win, and we did it."

Jordan Romano recorded a 1-2-3 ninth inning with two punch-outs for his 18th save in 21 opportunities.

Oakland starter James Kaprielian blanked Toronto through six innings before serving up the home run to Chapman, one of his best friends, to begin the seventh.

Kaprielian allowed five hits and four walks with one strikeout. It was his 24th consecutive start of six frames or fewer, extending the all-time A's record.

Domingo Acevedo (1-2) surrendered his seventh homer of the year to suffer his first loss since April 29.

A's rookie Nick Allen made a pair of dazzling defensive plays at second base in the fourth inning. With Bichette leading off the frame, Allen chased a pop-up into shallow right field and made a leaping catch to take away a hit. Then with two runners on base and two outs, Allen made a spectacular diving stop on a blistering one-hopper to rob Lourdes Gurriel Jr. and keep the game scoreless.

Blue Jays: RHP Kevin Gausman, who took a comebacker off his right foot Saturday, is expected to miss his scheduled start Thursday. Gausman played catch for a third straight day and could potentially make his next start this weekend.

Athletics: RHP Frankie Montas received a cortisone injection in his right shoulder after an MRI revealed inflammation but no structural damage. He will miss his next start and is considered day-to-day. ... RHP Dany Jimenez (strained right shoulder) has played catch out to 90 feet but needs to be stretched out farther over the next week to 10 days.

Blue Jays: Begin a four-game series in Seattle on Thursday. With Gausman (ankle) expected to miss his start, Toronto has not named a starting pitcher.

Athletics: Following an off-day, RHP Paul Blackburn (6-3, 2.90 ERA) will open a three-game home series against the Houston Astros on Friday.