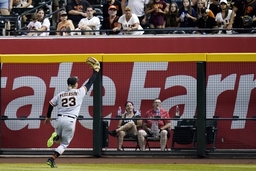 PHOENIX (AP) Josh Rojas planted the two-strike bunt seed in spring training after realizing, with his speed, he'd have better odds laying one down than swinging away.

Despite the analytics in his favor, the Arizona third baseman had yet to attempt it this season, worried about looking foolish if the ball rolled foul for a strikeout.

A pep talk from his dad convinced Rojas he should try. San Francisco's infield shift gave him the opportunity - and he pulled it off perfectly.

Rojas jump-started Arizona's five-run eighth inning with a two-strike bunt single and Daulton Varsho capped it with a three-run homer, helping the Diamondbacks extend the Giants' losing streak to six games with a 6-2 win Tuesday night.

"The scariest part is when you bunt and it goes foul, you look like an idiot," Rojas said. "If you can get past that and you look at strictly the numbers and get half of them in play - I think I could probably get more than half - you're increasing your 0-2 batting average from .100-.200 to .500-.600."

Rojas entered in the eighth inning as a pinch-hitter and missed two pitches from hard-throwing Dominic Leone (3-1). With a 1-2 count, the Giants shifted their infielders to the right side.

Rojas squared to bunt on Leone's next pitch, but pulled back when he saw the breaking ball wasn't a strike. Next pitch, Rojas got what he wanted - a fastball - and dropped it perfectly down the third-base line for the majors' second two-strike bunt single by a position player since 2016.

Rojas caused more problems with his speed, drawing several pickoff throws to first base by Leone, and then went to third on Cooper Hummel's single. He scored the tying run on a wild pitch and Varsho all but sealed the Diamondbacks' first series win against their NL West rivals since May 2019 with his homer to the pool deck in right-center.

Mark Melancon worked a perfect ninth to close it out.

"There's no setup to doing it," Diamondbacks manager Torey Lovullo said. "It's just instinctual play when you see that the field has been shifted and there's a clear lane for you to get a base hit if you execute right. Josh did that."

Joc Pederson gave San Francisco a 1-0 lead with a sacrifice fly in the fourth. Geraldo Perdomo tied it with an RBI single in the fifth.

The Giants took a 2-1 lead in the seventh on Austin Wynns' run-scoring single off Caleb Smith (1-1) that was initially ruled a foul ball when Hummel missed a sliding catch. After a long replay review, the ball was deemed fair, allowing Yermin Mercedes to score.

An end to their losing streak in sight, the Giants watched the win blow away in the desert air after Rojas' bunt with two strikes and Varsho's homer on a 102 mph fastball. San Francisco has lost 12 of 15.

"If you're going to point the finger, point it at me," Leone said.

Arizona designated RHP J.B. Wendelken for assignment after he allowed five runs over two innings in his last two appearances. He went 2-1 with a 5.28 ERA in 29 games this season. The Diamondbacks also claimed INF Sergio Alcantara off waivers from San Diego.

Diamondbacks: RHP Ian Kennedy has been put on blood thinners after a small blood clot was discovered in his right calf. Kennedy was placed on the 15-day injured list Monday after leaving Sunday's game against Colorado with calf pain. Lovullo said Kennedy's blood clot could be related to the altitude in Denver.