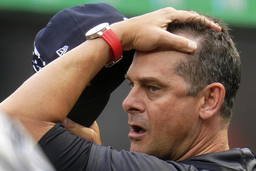 PITTSBURGH (AP) Bill Mazeroski threw out the first pitch. David Bednar froze one of the most feared hitters in baseball with the last.

In between, the Pittsburgh Pirates offered a fleeting glimpse of what they're trying to build, one that came at the expense of an old friend and briefly cooled off the hottest team in the majors.

The Pirates played a short tribute video for Taillon - who spent more than a decade with the organization before being traded to New York in January 2021 - as he walked to the mound. "When The Levee Breaks" by Led Zeppelin blared as Taillon warmed up, just as it had for home starts made by the popular right-hander during his four seasons in Pittsburgh's rotation.

Taillon called running out of the visitors' dugout a little weird, though nearly 18 months removed from the trade that sent him to New York in exchange for a handful of prospects for a club in a top-to-bottom reset, he wasn't exactly overcome with emotion. His bigger concern was trying to figure out a way to navigate Pittsburgh's left-handed-heavy lineup.

He didn't fare as well as he liked. Vogelbach hit a laser over the right-field wall leading off the second and Suwinski flicked a ball into the first row of seats in center field that scored two runs as Taillon (9-2) took his first loss since April 11.

Despite his stellar won-loss record, Taillon's ERA over his last six starts is north of 5.00. Even with the Yankees cruising atop the AL East with the All-Star break looming, Taillon is wary.

"It's a results-oriented league," he said. "But at the same time, I feel healthy and I feel like I'm making a lot of quality pitches, but it seems I'm getting burned every outing on just a couple of pitches."

Jose Quintana (2-4) held New York in check for five innings and Pittsburgh's bullpen did the rest. Bednar worked the ninth for his 13th save - striking out Aaron Judge looking with a runner on to end it - as the Pirates sent the Yankees to consecutive losses for just the fifth time this season.

Pittsburgh leaned into a rare visit by the Yankees, whose first appearance at PNC Park since 2017 produced the first sellout of the season at a ballpark that is typically more than half-empty most nights. Fans caught a glimpse of a lineup that included promising rookies like Suwinski and shortstop Oneil Cruz, and a gritty effort by Quintana.

The veteran left-hander, brought in on a one-year deal in the offseason, retired the Yankees in order just once but struck out seven.

Mazeroski, who hit the clinching home run in the bottom of the ninth in Game 7 of the 1960 World Series against the Yankees at Forbes Field, tossed the ceremonial first pitch. The crowd roared as the 85-year-old waved, setting the tone for a night that felt as if there was something at stake for two teams separated by more than 25 games in the standings.

New York reached the season's midway point at 58-23, the best record in the majors by a significant margin and well ahead of the club's pace last year, when the Yankees slogged to a 41-40 mark through the first 81 games.

New York rallied to make the playoffs a year ago. That likely won't be required this time around, not with the Yankees entering the day leading the AL East by a staggering 13 games.

Still, New York's blistering pace has cooled a bit of late with the All-Star break approaching. The Yankees are 2-3 halfway through their four-city road trip that wraps up in Boston this weekend.

Isiah Kiner-Falefa had three hits for New York. Gleyber Torres and Matt Carpenter added two apiece. Judge went 1 for 5, grounding into an inning-ending double-play with two runners on in the seventh and striking out in the ninth, symbolic of a night when the Yankees left nine men on.

Yankees: 1B Anthony Rizzo was scratched an hour before the first pitch with lower back tightness. DJ LeMahieu filled in for Rizzo at first. ... RHP Domingo German (right shoulder) will make at least one more rehab start before the team makes a decision on when he might be activated off the 60-day injured list. Manager Aaron Boone said German "looked good" and he is "encouraged" by German's progress. ... RHP Miguel Castro (paternity leave/restricted list) could rejoin the team on Wednesday.

New York's Luis Severino (4-3, 3.35 ERA) will try to pick up his first win in a month when he faces Pittsburgh's Mitch Keller (2-5, 5.14) on Wednesday. Keller has allowed three runs or fewer in five of his last six starts following a brief stint in the bullpen.