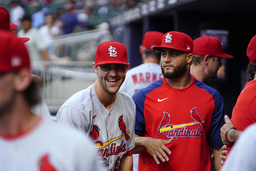 ATLANTA (AP) Ian Anderson enjoyed an important bounce-back game after his recent woes kept him from fully enjoying the Atlanta Braves' best stretch of the season.

Anderson (7-5) gave up eight hits with one walk and three strikeouts.

"I wanted to get in on the fun," Anderson said.

Anderson had allowed a combined 11 earned runs in back-to-back losses as his ERA climbed to 5.31. He worked on his mechanics in side sessions after allowing seven runs in two innings of a 14-4 loss at Philadelphia on Thursday.

"I definitely felt a lot better about how this one went," Anderson said, adding he felt better about "the total package, being more confident, throwing more strikes."

Anderson escaped a bases-loaded jam in the fifth, getting an inning-ending groundout from Dylan Carlson. He was welcomed by an appreciative manager Brian Snitker in the dugout.

"I was just really happy for what he did," Snitker said.

The defending champion Braves hope Anderson can show his 6.91 ERA in six June starts was an aberration.

"We need him getting back to being Ian, and that was a big, big step forward," Snitker said.

Riley hit a two-run homer, his 21st, and William Contreras also went deep in the first inning as Atlanta took a 5-0 lead. Matt Olson drove in two runs with two hits, including a first-inning single after Ronald Acuna Jr. singled and stole second.

The Cardinals have lost three straight and five of six. They remain three games behind division-leading Milwaukee in the NL Central.

Cardinals rookie right-hander Andre Pallante was pulled in the fourth after allowing consecutive run-scoring doubles to Olson and Riley, who finished with three hits. Pallante (2-4) allowed career highs of seven runs and 10 hits in 3 2/3 innings - his shortest of six starts.

"He knows what he needs to do in order to get back to where he needs to be," Marmol said of Edman. "Until that happens, we'll switch the lineup and get some matchups at the top."

Edman was held without a hit as left-hander Tyler Matzek, with his back to the plate, casually made a backhanded grab of his grounder in the eighth. Donovan had one hit as the Cardinals stranded 12 runners.

Matzek returned from the injured list on Monday after missing 46 games with left shoulder inflammation. He pitched a scoreless eighth, allowing one walk.

Cardinals: Marmol said LHP Genesis Cabrera (undisclosed injury) "was really good" when throwing live batting practice. Cabrera was placed on the IL June 25 and will be evaluated on Wednesday. ... Marmol said RHP Johan Oviedo "woke up feeling better than we anticipated" after being struck on his right hand by a line drive hit on Monday night. X-rays were negative.

Braves: One week after being placed on the 15-day IL, RHP Kenley Jansen (irregular heartbeat) threw off the mound before the game. Jansen is on pace to being activated when first eligible on July 12. "As soon as he's cleared ... he should be ready to go," Snitker said. ... OF Adam Duvall entered the game in the eighth as a defensive replacement in left field, his first appearance since he was hit by a pitch on his left hand Saturday at Cincinnati.

Cardinals RHP Miles Mikolas (5-6, 2.61 ERA) will make his first start against Atlanta since 2019 when he faces Braves LHP Max Fried (8-2, 2.66) on Wednesday night. Mikolas is 1-2 with a 2.61 ERA in five career appearances, including four starts, against Atlanta. Fried is 2-0 with a 0.69 ERA in two career starts against the Cardinals.