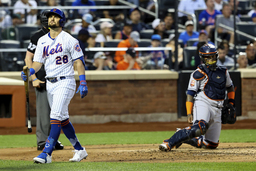 NEW YORK (AP) Kyle Tucker gave Astros starter Framber Valdez all the support he needed with a three-run homer in the first inning.

"We scored early and we kept scoring," manager Dusty Baker said. "That's the thing we got to do."

Tucker had a key early drive and a stolen base, Yordan Alvarez hit his 23rd home run and Valdez pitched a gem to lift the Astros over the New York Mets 9-1 Tuesday night.

Alvarez reached base five times, Yuli Gurriel also homered and Alex Bregman had three hits as Houston beat the Mets for the third time in a week. The AL West leaders swept a two-game series at home to begin a stretch of nine straight games against the Mets and Yankees. Houston is 5-2 in that string so far.

"You know, we're playing high-quality teams," Baker said. "I mean, these guys can score, just like the Yankees can score, and just like we can score."

Valdez (8-3) allowed six hits over eight scoreless innings, striking out four and inducing a dozen groundball outs. The left-hander came in with the highest grounder rate in the majors at 68.9%.

Valdez has one of the game's best curveballs, but he shied away from it for the second straight start. He dominated the Mets mostly with his sinker.

"I think we can all agree I have a pretty good curveball," he said via translator. "I feel comfortable throwing my curveball, but I tried to not throw it in counts where they might be expecting it."

Carlos Carrasco (8-4) had a second straight rocky outing against Houston, giving up six runs in 4 1/3 innings on six hits and three walks. The veteran right-hander allowed five runs to the Astros last Wednesday in a start cut short by lower back tightness.

Carrasco was peeved about a close call at first base in the first inning, when Jeremy Pena was initially called out on a double play, then ruled safe via replay review. Tucker homered three batters later.

"The first inning, the umpire made the wrong call right there," he said. "It changed the ballgame completely. I think he screwed up right there."

Starling Marte doubled twice in a three-hit game, but the rest of the Mets had just five hits as the club matched a season high with its second straight loss. The NL East leaders narrowly avoided being shut out for what would have been the third time this season.

Astros right-hander Enoli Paredes was helped in the ninth by a stellar catch from left fielder Chas McCormick, who jumped and reached over the railing in foul territory for Eduardo Escobar's popup. Paredes still gave up the shutout by walking James McCann with two outs and the bases loaded.

Tucker crushed his 14th homer in the first inning, then led off the fourth with a 12-pitch walk, swiped second for his 14th steal of the season and scored on Jake Meyers' single.

The 25-year-old Tucker is on pace for 31 homers and 31 stolen bases. Houston hasn't had a 30-30 player since Carlos Beltran in 2004, the year he was acquired from Kansas City in June. The last player with 30 homers and 30 steals in a season solely with the Astros was Jeff Bagwell in 1999.

Alvarez connected off reliever Chasen Shreve in the fifth, and he also had two singles and two walks. The slugger homered three times during two games against the Mets last week, including twice against Carrasco. Only Aaron Judge (28) has more home runs than Alvarez.

Jeff McNeil returned to the Mets' lineup after missing five games with right hamstring tightness. The 2019 All-Star singled in his first at-bat.

Houston has won six straight over the Mets. This is the team's first visit to Citi Field since 2014.

Mets: RHP Max Scherzer (strained oblique) had his minor league rehab start with Double-A Binghamton pushed back a day to Wednesday, but manager Buck Showalter said there hasn't been a setback in his recovery. ... New York promoted OF Ender Inciarte from Triple-A Syracuse after signing him to a minor league deal last week. OF Nick Plummer was optioned to Triple-A and LHP Locke St. John was designated for assignment.

Astros: OF Michael Brantley was placed on the 10-day injured list with right shoulder discomfort. ... McCormick was recalled from Triple-A Sugar Land two days after being demoted. Paredes was also called up. ... RHP Brandon Bielak was optioned to Triple-A on Sunday night. ... The Angels claimed OF Dillon Thomas off waivers after Houston designated him for assignment Friday.