After suspensions, Angels rally for 4-3 win over White Sox 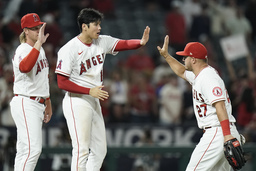 ANAHEIM, Calif. (AP) The Los Angeles Angels found out they'll pay a hefty price in suspensions for Sunday's big brawl with Seattle. In the short term, though, it seems that's galvanized a struggling ballclub.

Taylor Ward hit a go-ahead double in the seventh inning Monday night and the Angels rallied for a 4-3 victory over the Chicago White Sox. Not only was it Los Angeles' second consecutive one-run win, it marked the first time in nearly five weeks the Halos won back-to-back home games.

"It feels really nice," said Brandon Marsh, who had three hits and a sliding catch in the sixth inning to rob Luis Robert of at least a single. "It shows the trust we have in the bullpen and all the starters."

Noah Syndergaard snapped his four-game losing streak and struck out seven for the Angels, who won for only the fifth time in their last 19 home games.

The victory capped a hectic day. Less than two hours before the game, the Angels learned a total of nine players and coaches were suspended by Major League Baseball for their roles in Sunday's nasty fight with the Mariners.

"I would like to say it's just like being in that position when I'm standing there with Phil or anyone else - but it's not obviously," Montgomery said. "People are looking to you to be prepared. You have a responsibility to those guys (the players) and want to make sure that they have what they need."

Gavin Sheets had two hits for the White Sox, who have dropped five of six. Lucas Giolito pitched six solid innings but did not factor in the decision.

"He ended up in a really good spot this time to get them, but there's a position where the game breaks your heart and we couldn't hold it for him," manager Tony La Russa said.

The White Sox went ahead 3-2 in the seventh on Josh Harrison's RBI single before the Angels regained the lead in the home half.

Max Stassi drew a leadoff walk from Reynaldo Lopez (4-2) and moved to second on Marsh's single. Pinch-runner Monte Harrison and Marsh advanced on Andrew Velazquez's sacrifice bunt before Ward hit a two-run double off the wall in right-center that was just beyond Robert's reach.

Syndergaard (5-6) allowed three runs and six hits in seven innings for his first victory since May 24 against Texas.

Raisel Iglesias worked the ninth for his 14th save.

"Probably one of the best ones I've had all year," Syndergaard said. "Everything's getting better. I am trusting my delivery instead of just trying to be too fine with things."

The Angels got on the board with two outs in the second when Jared Walsh scored after a long fly ball hit by Marsh went in and out of Sheets' glove near the right-field wall. The ball deflected off the top of the short fence in the corner but stayed in play. It originally was ruled a home run, but got overturned to a triple.

Marsh scored when Velazquez hit a grounder up the middle that deflected off Giolito's foot into shallow right field for a hit.

The White Sox tied it in the sixth on RBI doubles by Andrew Vaughn and Jose Abreu.

Anderson stole second in the fourth inning to become the 31st player in White Sox history with 100 stolen bases. Anderson, in his seventh year with Chicago, is 10 for 10 on steals this season.

White Sox: 3B Yoan Moncada (right hamstring strain) worked out before the game with the anticipation he will return to the lineup Tuesday. ... RHP Liam Hendriks (right forearm strain) threw a bullpen, but there's still no decision on whether he will go on a rehab assignment.

Angels: INF Matt Duffy was placed on the 10-day injured list due to low back spasms. C Matt Thaiss was recalled from Triple-A Salt Lake.

Angels: A starter had not been announced for Tuesday, but rookie RHP Chase Silseth (1-2, 4.96 ERA) is part of the team's taxi squad and could be activated.