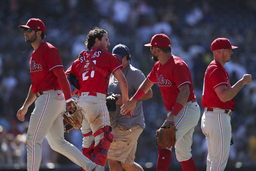 SAN DIEGO (AP) The Philadelphia Phillies are 2-0 since NL MVP Bryce Harper was lost indefinitely with a broken left thumb.

They all know what they have to do to keep it rolling.

Kyle Schwarber hit a go-ahead, three-run home run in the seventh inning and the Phillies' bullpen threw 6 1/3 lights-out innings in an 8-5 win over the San Diego Padres on Sunday.

"It's the reality of the situation, right?" Schwarber said. "You lose the MVP, a guy who's putting up MVP numbers again, we don't know the extent of it, but we all have to come together as a team and really make sure that when our name's called on, we're going to be prepared to get the job done."

Harper was injured when he was hit by a pitch from left-hander Blake Snell on Saturday night. The slugger, who has had a great season while playing mostly at designated hitter because of an elbow injury, is expected to see a specialist after the Phillies return home.

"It stinks. No one wants to see that," Schwarber said. "And we're hoping that it's not going to be too bad but I felt like we all did a really good job today stepping up."

Harper was injured in the fourth inning of a scoreless tie Saturday night and the Phillies went on to win 4-2. At 39-35, they are a season-high four games over .500 and are 17-6 since manager Joe Girardi was fired and replaced on an interim basis by Rob Thomson.

Phillies second baseman Jean Segura has missed a month with a broken finger and is expected to be out for another six to eight weeks.

"It's a really good team," Schwarber said. "When you lose two players of the caliber those two are, it sucks. But that's why there's depth and that's why there are guys who can come up in those spots and take it to a high level."

San Diego's Yu Darvish left with a 5-3 lead after striking out a season-high nine in six innings. But reliever Nabil Crismatt (4-1) couldn't hold it after getting into trouble opening the seventh. Bryson Stott walked, Matt Vierling singled and Schwarber, the leadoff batter, drove a 2-1 pitch into the left field seats for the lead. It was his 21st.

Schwarber also had an RBI double in the second for the Phillies, who took three of four.

Garrett Stubbs, who played at nearby Torrey Pines High School and then at Southern California, singled in an insurance run for the Phillies in the eighth after striking out in his first three at-bats. Matt Vierling scored on a wild pitch in the ninth.

Nick Nelson (2-1) pitched 3 1/3 perfect innings in relief of Kyle Gibson, with two strikeouts. Andrew Bellatti, who went to Steele Canyon High in suburban Spring Valley, pitched a perfect ninth for his first career save. Corey Knebel pitched a perfect seventh and Jose Alvarado allowed Eric Hosmer's double leading off the eighth and then retired the side.

San Diego went ahead 5-2 in the third on two-run doubles by Austin Nola and rookie C.J. Abrams that knocked out Kyle Gibson. The right-hander allowed three hits, two walks and hit a batter that inning. Overall, Gibson allowed five runs and four hits, walked three and struck out two in 2 2/3 innings, his shortest outing this season.

Darvish allowed three runs and seven hits, with one walk.

The Phillies went ahead in the second on Bryson Stott's RBI single and Schwarber's RBI double.

Stubbs, the catcher, and Bellatti both had big cheering sections of family and friends. Bellatti said he gave the ball from the final out to his father.

"It was a blast," Bellatti said.

"When I walked out there after the game was done, it was like, `Oh that was pretty cool, two San Diego natives in the battery closing out a series win,'" Stubbs said.

A third local product, former No. 1 overall draft pick Mickey Moniak from La Costa Canyon High in Carlsbad, arrived around game time after being recalled from Triple-A Lehigh Valley to replace Harper on the roster. Moniak drove from Allentown to Philadelphia on Sunday morning and then flew to San Diego. Even though it was just for a few hours, "I'll take as much time in San Diego as I can," Moniak said.

Phillies: RHP Zack Wheeler (6-4, 2.77 ERA) is scheduled to start Tuesday night in the opener of a three-game home series against Atlanta, which will counter with RHP Charlie Morton (4-3, 4.84).