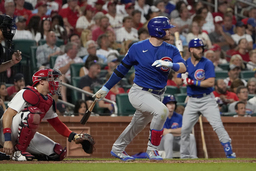 ST. LOUIS (AP) Kyle Hendricks carried a shutout into the eighth inning and Nico Hoerner homered to help the Chicago Cubs to a 3-0 win over the St. Louis Cardinals on Friday night.

Ian Happ also drove in a run for Chicago, which has won two of three.

Hendricks (3-6) continued his mastery over the Cardinals, who had won 12 of the previous 17 against the Cubs. He gave up five hits in 7 1/3 scoreless innings, struck out six and walked one. Hendricks improved to 13-3 in 25 lifetime starts against his NL Central rivals, his most victories against any team.

He says there is no logical reason for his success against St. Louis.

"I've just got to keep getting lucky against them," Hendricks said. "Use what I did today and build on it."

Chicago manager David Ross believes Hendricks simply knows the Cardinals inside and out.

"Some teams have your number, and some that you feel like you pitch pretty good against," Ross said. "In game, in season, in division, maybe that has a lot to do with it. Just facing the team a lot, you kind of know how you want to work them, how you have worked them and you know where their holes are."

Hendricks had given up six or more earned runs in four of 13 starts entering the contest. His last win came in a 6-0 triumph over San Diego on May 9.

"I did a better job of establishing the fastball and throwing strikes with it," Hendricks said.

St. Louis manager Oliver Marmol has seen enough of Hendricks, who has recorded 18 quality starts in 25 starts against the Cardinals.

"I'm ready for him to retire," Marmol said.

Chris Martin worked out of a one-out jam with runners on second and third after replacing Hendricks in the eighth. David Robertson finished for his ninth save in 12 opportunities.

Hoerner drilled a two-run shot off Cardinals starter Andre Pallante (2-3) in the second inning. Hoerner has reached safely in 17 of his last 20 games.

Happ pushed the lead to 3-0 with an RBI double in the fifth.

Pallante gave up three runs on seven hits over six innings. He struck out two and walked three.

Chicago, which recorded its eighth shutout of the season, improved to 4-4 following a 1-11 skid that ended on June 16.

St. Louis LHP Steven Matz threw a lengthy bullpen session Friday. He's expected to start at Triple-A Memphis on Tuesday. He has been out since May 23 with left shoulder impingement.

Cubs: INF David Bote was activated before the game. He started at second base and went 0 for 4. Bote had missed the first 70 games after undergoing left shoulder surgery.

St. Louis RHP Miles Mikolas (5-5, 2.64) will face RHP Adrian Sampson (0-0, 0.00) in the second game of the three-game series Saturday afternoon. Mikolas is 4-2 with a 2.08 ERA in 12 appearances against the Cubs. Sampson, who will be making his first start of the season, has not allowed a run in two relief appearances covering 5 2/3 innings.