Guardians rally in 9th for 5-3 victory over Dodgers 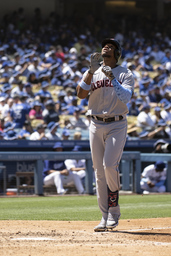 LOS ANGELES (AP) Andres Gimenez drove in the go-ahead run with the bases-loaded in the ninth inning, Oscar Gonzalez hit his first major league homer and scored the winning run, and the Cleveland Guardians rallied for a 5-3 victory over the Los Angeles Dodgers on Sunday.

The surging Guardians took two of three from the Dodgers and have won 15 of their last 19. They were 7 1/2 games back of AL Central leader Minnesota on May 29 but will begin a three-game series against the Twins on Tuesday only one game behind.

"I don't think we're paying attention that much. Obviously, we got a big series coming up in the next few days," said Guardians starting pitcher Shane Bieber, who struck out nine in 6 1/3 innings. "We're taking advantage of the opportunities that we create and kind of see where we land."

Los Angeles native Eli Morgan (3-2) got the win and Emmanuel Clase retired the Dodgers in order in the ninth for his 15th save.

"We're asking a lot of these young guys. I know they get tired, but they bring it and just to hear their enthusiasm during that game, that got me going," manager Terry Francona said.

The Dodgers are 7-9 in June but still lead the NL West by a half-game over San Diego.

Gonzalez drew a walk from Craig Kimbrel (0-3) with one out in the ninth before Josh Naylor hit a high fly ball down the right-field line for a double. Steven Kwan was intentionally walked to load the bases before Gimenez's hit up the middle with Los Angeles' infield drawn in.

Ernie Clement, who had two hits, added an insurance run with a sacrifice fly to score Naylor.

Cleveland grabbed an early 1-0 lead before the Dodgers tied it in the second on an RBI double by Gavin Lux. Freeman led off the third with a solo shot to right for his seventh homer of the season.

Gonzalez evened it at 2 in the sixth when he connected on a low slider from Heaney and put it over the fence in left center. Gonzalez has hit in 18 of 22 games since making his major league debut on May 26.

The Dodgers regained a 3-2 advantage in the seventh after Eddy Alvarez came home when second baseman Gimenez threw wide of the bag at first on Turner's infield single.

Cleveland rallied to tie it in the eighth on pinch-hitter Richie Palacios' double down the right-field line.

Heaney, who missed two months due to left shoulder discomfort, allowed two runs (one earned) and five hits with seven strikeouts and one walk in five-plus innings. His 77-pitch day ended in the sixth after Gonzalez's home run and a walk to Naylor.

"He threw the ball outstanding. He just ran out of gas a little bit. He gave us what we needed and hoped for," manager Dave Roberts said of Heaney.

Bieber, who grew up an hour south from Dodger Stadium in Orange County, allowed three runs (two earned) on seven hits in 6 1/3 innings. It is the seventh time in 13 starts this season that Bieber has worked into the seventh inning.

The Guardians are unbeaten in their last 10 interleague games when the right-hander is on the mound.

Cleveland got its run in the second inning mainly on Alvarez's outfield inexperience.

The Dodgers right fielder had a routine fly ball hit by Oscar Mercado pop out of his glove to lead off the second for a two-base error. Two batters later, Alvarez made a bad read on Clement's ball and it fell in front of him for a single.

Austin Hedges followed with a sacrifice fly to bring in Mercado and give Cleveland a 1-0 lead.

Alvarez was in right field after Mookie Betts was placed on the injured list due to a cracked right rib. Coming into Sunday, Alvarez had played only seven innings in the outfield at the major league level. He came up through the White Sox and Marlins organizations as an infielder before signing with the Dodgers this year.

"It's certainly not Eddy's fault. He hasn't played right field, I wanted to get his bat in there," Roberts said about putting Alvarez in right. "It's a tough sun field. He's doing the best he can. I'm sure he said it was on him but if it is on anyone, it's on me for sure."

Guardians: OF/DH Franmil Reyes (right hamstring tightness) has completed a rehab stint with Triple-A Columbus and is expected to join the team in Minnesota for the upcoming series.

Dodgers: Begin a nine-game road trip in Cincinnati on Tuesday with RHP Tony Gonsolin (8-0, 1.42 ERA) on the mound.