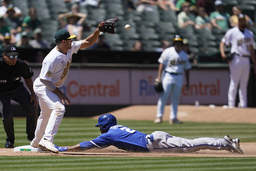 OAKLAND, Calif. (AP) Brad Keller allowed one hit in seven crisp innings to lift Kansas City to a 2-0 win over the Oakland Athletics on Saturday.

Jose Cuas retired two batters and allowed a one-out double in the eighth. Scott Barlow set down the final four batters for his eighth save to complete the two-hitter and give the Royals a third consecutive win.

"He was so good all day," Royals manager Mike Matheny said of Keller. "He hit the middle of the plate maybe 10 times out of almost 100 pitches so he was trusting the movement. He had movement going both ways, kept the ball on the ground and let guys make plays behind him."

Keller (2-8) was dominant in his first win since May 3. The 22-year-old retired 17 of the first 18 batters he faced and worked around three walks for his first road victory in five starts this season.

Oakland's only hit off Keller came on Jonah Bride's two-out double in the sixth just past the outstretched glove of left fielder Andrew Benintendi. After walking Tony Kemp and Seth Brown to load the bases, Keller received a mound visit from pitching coach Cal Eldred then got Ramon Laureano to fly out.

Pinch-hitter Ryan O'Hearn doubled in in Michael A. Taylor in the seventh to break a scoreless tie and assure Kansas City of its first series win since taking two of three from Colorado in mid-May. Whit Merrifield added an RBI single in the ninth.

The A's were shut out for the eighth time this season, dropped their eighth straight at home, and fell to a majors-worst 22-45. Oakland has lost 15 of 17.

Taylor tripled off Cole Irvin(2-4) with one out in the seventh when left fielder Brown dove and missed the sinking line drive. After Domingo Acevedo replaced Irvin, O'Hearn followed with a chopper that hit in front of home plate then bounced high over the head of A's first baseman Christian Bethancourt and went down the line.

"It's an aggressive play, he went all in," Kotsay said. "We still had an opportunity to get second out in that inning and leave the runner at third base."

Irvin allowed three hits and had six strikeouts in 6 1/3 innings. He hasn't won since coming off the Injured List on May 22.

Keller retired the first six until Elvis Andrus walked leading off the third. After Luis Barrera struck out swinging, Bride lined into an unassisted double play at first base.

O'Hearn did not warm before his pinch-hit because the batting cage at the Coliseum is in center field and there were several players already lined up.

"I went over there and it's a small cage and there was like 10 guys lined up to hit and so I just said I'm going to go in cold today," O'Hearn said. "I took a swing before I got in the box, kind of loosened up and said `Here we go.'"

Four days after making his major league debut, Bride made one of the best plays by an A's third baseman this season when he dove behind the pitcher's mound to rob Benintendi of a bunt hit in the fifth inning.

Oakland third baseman have committed a team-leading 11 errors this season. Only Texas third basemen (12) entered the day with more.

Athletics: Brown was shaken up after his diving attempt and was checked out by a team trainer but stayed in the game.