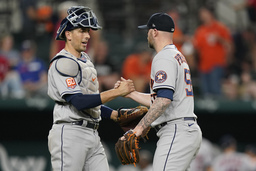 ARLINGTON, Texas (AP) Jose Altuve took off toward home plate hoping to get into a rundown so Houston could have runners at second and third. Things worked out even better than that in a four-run winning rally in the eighth inning.

"We're at a lull in the action ... then all of a sudden, it just happened," Astros manager Dusty Baker said. "That was quick."

Kyle Tucker extended his career-best hitting streak to 13 games with a two-run homer that capped Houston's four-run outburst over only nine pitches, and the AL West-leading Astros beat the Texas Rangers 4-3 on Tuesday night.

Altuve and Michael Brantley opened the eighth with consecutive singles before Alex Bregman hit a hard grounder at shortstop Corey Seager, who threw to the plate instead of trying to start a double play. Altuve was caught in the baseline, but scored the first run when rookie third baseman Ezequiel Duran couldn't handle catcher Sam Huff's throw.

"Probably," Texas manager Chris Woodward said, when asked if Seager should have gone for the double play instead.

"He asked me about it and admitted that he probably should have done that. Hindsight's 20/20. He's being aggressive. He's trying to make a play. So it's hard to fault him for that," Woodward said. "Unfortunately it didn't work out for us, but we've still got to execute the play and get an out."

Rangers reliever John King (1-3) retired only one of the five batters he faced. That was an RBI groundout by slugger Yordan Alvarez on the pitch after the botched rundown - and a pitch before Tucker's 12th homer of the season.

"I'm glad the way we did it and happy that we won the game," Altuve said.

"Might be the victory of the year," Baker said. "I can't remember a more exciting finish than that. Boy, we needed that badly."

The Astros had lost four of their previous five games, including the series opener when Texas had a three-run eighth for a 5-3 win. The Rangers had their three-game winning streak snapped, missing a chance to match their longest this season.

"That was a frustrating one," Woodward said.

Bryan Abreu (4-0), the first of three Astros relievers, threw a scoreless seventh. Ryan Pressly worked the ninth for his 12th save in 14th chances.

The Rangers went ahead 3-0 in the fourth on a two-run homer by Nathaniel Lowe, who pulled a pitch that landed 416 feet away from the plate in the Texas bullpen in right-center in the fourth inning. It was his eighth homer overall, his seventh in his last 22 games.

Duran, who had never played above Double-A before his big league debut June 4, led off the third with an infield single and scored on Marcus Semien's two-out single.

Dane Dunning pitched six scoreless innings for the Rangers, but is still winless in his last eight starts. The right-hander struck out four and walked four while allowing only two hits, both doubles.

Astros: Rookie SS Jeremy Pena returned to Houston to be evaluated by team doctors a day after he got hurt falling forward onto the turf when going after a bloop hit in in the third inning Monday night. Pena stayed in that game after getting checked out and flexing his left hand. Baker said the injury wasn't the left wrist that was repaired in surgery last year, but didn't elaborate. He said the Astros were getting a second opinion after Pena was initially evaluated by Rangers doctors. ... Baker said RHP Lance McCullers had a "very encouraging" bullpen session that included hitting 90 mph. McCullers still hasn't thrown any breaking balls in his recovery from an arm injury in last year's American League Division Series.

Rangers: CF Eli White had surgery in which two screws were inserted into his fractured right wrist. He is not expected to resume baseball activities for 6-8 weeks.

The Astros were two players short with Pena back in Houston and right-hander Hector Neris starting to serve his reduced three-game suspension. The reliever was suspended after his ejection from a game June 6 in which he plunked one Seattle batter and nearly hit another in the head. Neris appealed, and a settlement between MLB reduced the discipline to three games without the case going to a hearing. The Astros are not permitted to replace Neris on the active roster during his suspension.

Astros right-hander Luis Garcia, 0-4 his last five starts, is scheduled to pitch in the series finale. The Rangers will likely go with a bullpen game in the spot of rookie right-hander Glenn Otto, who will miss his second consecutive scheduled start while on the COVID-19-related injured list. Otto went into protocols Friday, just before his last scheduled start.