Rangers get 3rd win in row, 5-3 over AL West-leading Houston 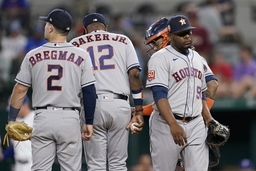 ARLINGTON, Texas (AP) Brad Miller and the Texas Rangers didn't have to hit the ball too hard or very far in a winning rally.

"That was fun, that was just good baseball," Rangers manager Chris Woodward said about their three-run eighth inning.

Miller grounded an RBI single with an exit velocity of 66 mph the opposite way through a wide-open hole on the left side of the drawn-in infield for the go-ahead run, and Texas beat the AL West-leading Houston Astros 5-3 Monday night for its third consecutive victory. The Rangers also had a couple of stolen bases and two productive groundball outs.

Jonah Heim greeted reliever Hector Neris (1-3) with a single to open the eighth before pinch-runner Charlie Culberson stole second base and advanced on Nathaniel Lowe's groundout to the right side. Ezequiel Duran drove Culberson home with a tying single grounded through the middle, then the rookie third baseman had his first career stolen base and went to third on a wild pitch before Miller's hit.

"What did I do? I hit a dinker," Milller said while being doused by teammates as he did a postgame television interview on the field.

"They found the hole and stole some bases on us," Astros manager Dusty Baker said. "That's a tough one to lose right there."

Corey Seager had two hits to snap a 3-for-35 slump before his RBI groundout in the eighth sent home the final run for the Rangers (29-31). They are alone in second place in the division, but 7 1/2 games behind the Astros, who have lost four of five.

Houston slugger Yordan Alvarez went 2 for 4 to extend his on-base streak to 14 games. It was the 10th multihit game for Alvarez since May 29 while hitting .500 (27 of 54) during that on-base streak and raising his season batting average from .247 to .315. The Astros last week finalized a $115 million, six-year contract through 2028 for the outfielder/designated hitter who turns 25 on June 27.

Alvarez had an RBI single in the first and appeared to be robbed of a two-run homer to end the fifth when Adolis Garcia made a leaping catch with his glove extended toward the top of the 8-foot wall in right field.

Mauricio Dubon and Michael Brantley had RBI singles in the second to put Houston up 3-0 against Rangers starter Taylor Hearn, who didn't give up any more runs while pitching into the sixth. Houston didn't have a hit after the third inning.

Astros standout rookie shortstop Jeremy Pena had both of his hands behind his back when face down in shallow center field after a lunging attempt to catch Seager's bloop single in the third. That was the third single in a row to start that inning and load the bases, though Texas got only a sacrifice fly from Kole Calhoun to make it 3-1.

Martin Maldonado, the 35-year-old catcher for the Astros, made two nifty catches behind the plate - only one counted as an out.

The Rangers fourth ended when Leody Taveras, the 23-year-old Texas center fielder in his 2022 debut, tipped a 2-2 pitch that ricocheted off Maldonado's mitt and popped up in the air and over his head. Maldonado turned around, reached out and caught the ball while falling down.

Maldonado was against the screen near the Rangers dugout when reached up to catch a towering foul ball by Garcia for what appeared to be the third out in the seventh. But umpires ruled the ball had skimmed the net, and five pitches later Garcia hit an RBI single.

Astros: RHP Jake Odorizzi (lower left leg tendon strain) is expected to go through fielding drills for the second time in three days Tuesday. That "could be the last step before going on a rehab assignment. He has been in the IL since May 17 after getting hurt at Boston.

Rangers: CF Eli White was put on the injured list with a right wrist fracture and scheduled to have surgery Tuesday. It will then be about six weeks before resuming baseball activity. He was injured in a collision with left fielder Culberson on Sunday. ... Taveras was recalled from Triple-A Round Rock. He had a hit, scored a run and made a running catch to end the game.

Astros RHP Jose Urquidy has allowed 14 runs (12 earned) over 15 innings in his three starts since limiting Texas to one run in 6 2/3 innings to beat them at home May 22. Rangers RHP Dane Dunning is 0-3 with a 5.40 ERA in his seven starts since the beginning of May.