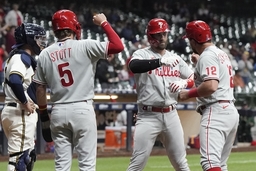 The Phillies won their season-high sixth in a row, five of them since interim manager Rob Thomson took over when Joe Girardi was fired on Friday.

The NL Central-leading Brewers have lost a season-worst five straight. Milwaukee has scored a total of six runs during its skid and been shut out three times.

Stott and Hoskins hit two-run homers in the third off starter Adrian Houser (3-6) to stake the Phillies to a 4-0 lead.

"Just playing every day is not the main thing, but just getting more comfortable and being more relaxed, for sure," Stott said.

Herrera added a solo drive in the fifth off Houser, who had given up only three home runs over 51 1/3 innings in his 10 previous starts.

Harper hit a three-run homer off Luke Barker in the ninth. The Phillies have scored six or more runs in five of their six consecutive wins.

The Brewers got a runner past first base only once, when Christian Yelich singled and stole second in the sixth. Nola ended that threat by striking out Luis Urias.

Brewers: Activated SS Willy Adames and optioned INF/OF Pablo Reyes to Triple-A Nashville. Adames had been out since suffering a right high ankle sprain May 15. He experienced right quad soreness while on a rehab assignment that delayed his return. . 2B Kolten Wong, who left Tuesday's game with right calf soreness, is day to day, manager Craig Counsell said.

The Phillies' two straight victories on Sunday and Tuesday - with ninth-inning, game-winning home runs by rookies - marked the first time the Phillies have won consecutive games that way, in the ninth inning or later, since at least 1900, according to Elias. The homers were by Stott against the Angels on Sunday and by Matt Vierling against the Brewers on Tuesday. Milwaukee had been 27-0 when leading after eight innings this season.

CALL HIM THE STREAK

Thomson is the first manager in the majors to win his first five games since Jim Leyland did for the Detroit Tigers in 2006. He's the first Phillies manager to do so since 1915, when Pat Moran won his first eight.

Counsell on the Brewers' scoring woes: "We're going through a tough stretch. We've got a lineup full of guys not feeling great at the plate right now, not swinging it well. We've scored runs at a pretty good clip for a large chunk of the season and so you've just got to weather the storm, you've got to stay in the fight and you've got to keep at it. It will change. We know that."