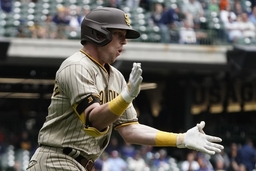 MILWAUKEE (AP) Jake Cronenworth hit a three-run home run in the 10th inning and the San Diego Padres extended their winning streak to three games with a 6-4 victory over the Milwaukee Brewers on Sunday.

Trevor Gott (1-1) pitched the 10th for Milwaukee because Josh Hader had worked the ninth after the Brewers tied the game at 3 on Kolten Wong's second home run of the game in the eighth.

Wong also led off the game with a home run. It was the only run allowed by Padres right-hander Mike Clevinger, who struck out five over three innings in his first start back from a two-week stint on the injured list.

"I felt a little uncalibrated the first inning," Clevinger said. "Then, I started zoning in and by the time the third hit, I felt like I was where I was the previous start."

The Padres wiped out that deficit in the fifth, scoring three runs off Milwaukee left-hander Eric Lauer. Only two were earned, though, because of an error by shortstop Pablo Reyes.

"It didn't seem like there was a lot of super-hard contact," Lauer said. "A couple of dink hits and weird things that went on ended up costing us. Sometimes that's how baseball goes."

Reyes sparked Milwaukee's rally three innings later, reaching on a leadoff single and scoring when Wong followed with his fifth homer of the season.

The Brewers put the go-ahead run on in the ninth, but came up empty against Tim Hill (1-0).

"We're just in a little stretch where we're not getting much going," said Brewers manager Craig Counsell, whose team scored just four runs over the final three games of the four-game set.

Taylor Rogers gave up an RBI single to Andrew McCutchen in the 10th, but got Rowdy Tellez to ground into a double play to earn his 18th save of the season and gave the Padres a 5-3 win over Milwaukee in the season series.

"Anytime you can win three out of four against a team like that, that's probably going to be in the playoffs, is huge," Cronenworth said.

Nick Martinez had started eight of his first nine outings this season, including each of his past two, but came out of the bullpen Sunday in a "piggyback" role that Padres manager Bob Melvin has deployed at times this season.

Martinez was on a roll before Reyes and Wong sparked Milwaukee's eighth-inning rally. Martinez allowed two runs and four hits in four innings.

"Nick came in and might have had his best stuff on the year," Melvin said. "We're down a bullpen guy, so he went out for the eighth and unfortunately, (allowed) a little squib hit and then a homer.

"Other than that, I think that was as good as he has pitched all year."

Hader's scoreless ninth inning marked his 40th consecutive appearance without allowing a run, tying him for the longest scoreless streak by a relief pitcher in MLB history with Ryan Pressly, who accomplished the feat for the Astros between Aug. 15, 2018, and May 20, 2019.

Padres: Fernando Tatis Jr. will undergo a CT scan Monday in San Diego, which is expected to help determine when he will be able to start swinging a bat again.

Brewers: INF Luis Urias was held out of the lineup again as he deals with a sore right thumb. Urias is expected to return Tuesday when the Brewers open a series against the Phillies.

Padres: LHP Blake Snell (0-2, 4.80) gets the start as the Padres open a seven-game homestand against the Mets, who send Carlos Carrasco (6-1, 3.63) to the mound for the first of a three-game series at Petco Park.