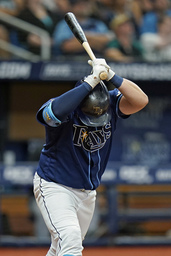 Adam Engel opened the eighth with a pinch-hit double off Brooks Raley and scored on Danny Mendick's single. Burger then put Chicago up 3-2 with his drive off Jalen Beeks (1-1) as the White Sox won for just the third time in 10 games.

"It's a special one for sure," Burger said. "I'll always remember that one. I just told myself to be smooth and be calm and don't try and do too much. Fortunately, I got a pitch up in the zone that I could do something with."

After Kendall Graveman worked out of a bases loaded two-out jam in the eighth by getting a grounder from Isaac Paredes, Liam Hendriks got the final three outs for his 15th save in 18 chances.

Graveman loaded the bases by walking Brett Phillips, who is hitless in 21 at-bats, including 15 strikeouts. He did strikeout speedy Vidal Brujan with runners on the corners and one out.

"Probably the big at-bat is Vidal's at-bat right there," Rays manager Kevin Cash said. "He's really a tough guy to double up if he puts the ball in play but Graveman came back and made some big pitches, and then got Vidal to expand a little bit at the top of the zone."

Rays right-hander Drew Rasmussen was in line for his sixth win after scattering three hits over seven scoreless innings. The righty rebounded after allowing five runs over three innings Monday in a loss at Texas that ended a five-game winning streak.

Chicago's Dylan Cease struggled with his control, allowing two unearned runs, one hit and seven walks along with five strikeouts in 4 ? innings. The righty threw 54 of 101 pitches for strikes.

Yandy Diaz hit an opposite-field two-out grounder with a strange spin that first baseman Jose Abreu couldn't handle and was charged with an error, allowing Paredes to score the game's first run from second.

Ji-Man Choi made it 2-0 when he slapped a single to left off reliever Aaron Bummer to beat the shift.

Cease survived a 33-pitch second by getting an inning-ending grounder to complete a 10-pitch at-bat by Kevin Kiermaier with the bases loaded. Randy Arozarena's leadoff single was the only hit the right-hander gave up.

Cease was in line for the loss and if he would have gotten it, he would have joined Buck O'Brien (July 29, 1913 against Boston) as the only pitchers in team history to take the loss after having seven or more walks and not allowing an earned run.

Rays: RHP Andrew Kittredge (back) could be back in the next few days. . An MRI on RHP J.P. Feyereisen (shoulder) showed a bone bruise. ... RHP Shane Baz (elbow) could go up to five innings Sunday for Triple-A Durham.