Brewers take 2 from Cubs, Taylor HRs in both, Ashby fans 12 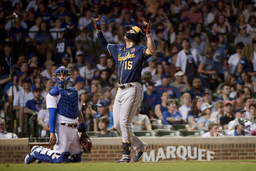 CHICAGO (AP) Tyrone Taylor homered in both games, Aaron Ashby struck out a career-high 12 in the nightcap and the Milwaukee Brewers swept a doubleheader from the Chicago Cubs 7-6 and 3-1 Monday.

Luis Urias lined three-run homer into the basket in left-center to break a seventh-inning tie in the opener. The Brewers trailed 4-2 before Taylor's two-run homer in the sixth off Matt Swarmer.

Milwaukee led 2-1 in the second game when Taylor homered off left-hander Brandon Hughes in the eighth.

"Everyday playing baseball is fun, man," said Taylor, who also made a terrific catch in right field to end the sixth inning in the second game. "It was a fun day ... a long day but a fun day."

Taylor went deep in consecutive games for the third time in his career and now has seven homers for the season. He's 10 for 31 with three homers and 10 RBIs in his last nine games, all on the road.

"That catch kind of gets us out of an inning, then the homer to give us some breathing room," Milwaukee manager Craig Counsell said. "He had a wonderful day and he's had a wonderful road trip."

Victor Caratini hit a tiebreaking home run in the fifth inning against his former team, and the Brewers won their third in a row while getting just three hits in the nightcap. The Cubs extended their losing streak to three.

Ashby (1-3) allowed one run and five hits six-plus innings, giving up Willson Contreras' home run over the left-field bleachers and onto Waveland Avenue in the fourth.

"This is what we think Aaron is going to be," Counsell said. "He's throwing the ball real well and he's just got big-time stuff.

It was a nice follow-up for Ashby, who tossed 5 2/3 innings and allowed only one run in his previous start last Wednesday.

He left with the bases loaded in the seventh, and Brad Boxberger struck out pinch hitter Nico Hoerner and got Andrelton Simmons to ground into a 5-2-3 double-play.

"I owe some guys something," Ashby said. "Steak dinners or something. Tyrone with that unbelievable catch. An awesome job by Box getting the strikeout and the ground ball."

Josh Hader remained perfect in 18 save chances by getting his second of the day.

"I've been pretty fresh this month, so I felt like I was able to do it and I bounce back pretty well," Hader said. "Give it a go, you know, and see what happens from there."

"A couple of misfires there, but a really big outing for us, and to keep us in that ballgame, that was huge," Chicago manager David Ross said of Espinoza.

The first game was tied at 4 when Mike Brosseau singled off Daniel Norris (0-3) with two outs and Kolten Wong walked. Urias hit a 3-2 slider for a drive that barely made it over the ivy, his fifth homer this season. Jace Peterson also hit a long solo drive for Milwaukee.

Swarmer and Milwaukee's Ethan Small made their big league debuts in the opener. It marked the first time in Brewers history that both starters made their debuts and the first for the Cubs since 1944.

Swarmer allowed four runs (one earned), five hits and one walk in six innings. Small was charged with two runs and four hits with four strikeouts in 2 2/3 innings.

Miguel Sanchez (1-1) gave up one hit in two scoreless innings.

A video review confirmed Taylor's leaping catch of a fly ball from Frank Schwindel. Taylor ran, timed his jump into the wall and fell to the warning track. The ball squeezed up and nearly out of Taylor's glove.

"I didn't know I had it all the way, but I was confident," Taylor said. "I was certain that caught it, so I was a little tripped out that they challenged."

BACK TO THE FARM

The Brewers optioned Small to Triple-A Nashville between games, then selected the contact of RHP Luke Barker to fill the roster spot.

Brewers: Placed RHP Brandon Woodruff on the 15-day IL with a right high ankle sprain a move retroactive to Saturday. Woodruff a two-time All-Star, sustained the injury on Friday at St. Louis. He's 5-3 with a 4.74 ERA in nine games this season. The Brewers recalled RHP Peter Strzelecki from Triple-A Nashville.

Cubs: Placed rookie OF Seiya Suzuki on the 10-day injured list, retroactive to Friday, with a left ring finger sprain. Suzuki was injured in Thursday's game against the Reds. . Placed OF Jonathan Villar on the 10-day IL, retroactive to Friday, with a mouth injury incurred while training. ... Transferred RHP Ethan Roberts (right shoulder inflammation) to the 60-day IL.