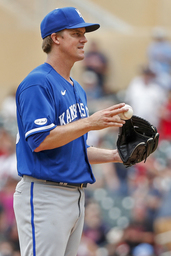 MINNEAPOLIS (AP) Minnesota's Sonny Gray and Kansas City's Zack Greinke left Sunday's game with injuries, leaving their teams to wonder how much time each will miss.

Gray cruised and was backed by Gio Urshela's three-run homer before leaving in the seventh inning because of right pectoral soreness during the Twins' 7-3 win over the Royals on Sunday.

Twins manager Rocco Baldelli said Gray felt "minor pec tightness" for a couple of pitches. Gray was getting an MRI after the game and didn't speak with reporters.

Baldelli said the team will know more in the coming days and Gray will travel with the team to Detroit.

"It wasn't something that he was pitching through, for the most part," Baldelli said. "At that point, he has to come out. There's no way around that.

"When he came out, we didn't know he had some issue in his forearm," Kansas City manager Mike Matheny said. "So that's probably something that may have been with him from the beginning that we weren't aware of. But unfortunately, the elbow area, the flexor area wasn't feeling great."

Greinke has a 5.05 ERA and has allowed at least five earned runs in three of his last four starts after not giving up more than three in any of his first six.

Gray (3-1) allowed two hits and retired 14 in a row before Andrew Benintendi's single leading off the seventh. With a 3-1 count on Bobby Witt Jr. and Kansas City asking for a video review to try to get a hit batter call, Baldelli and an athletic trainer came to the mound as Gray appeared to be trying to stretch a muscle near his pitching shoulder.

"Just over the white the whole game, kind of took the action to them, missed some bats, everything you want to see," Baldelli said. "It was another great start by him. It's fun. He's like a little bulldog out there. He goes right at them. It was very nice until we had to take him out."

Gray was replaced by Griffin Jax, who struck out Witt and allowed MJ Melendez's RBI double.

Gray didn't walk a batter and struck out four as his ERA dropped to 2.41 in his first season in Minnesota. He allowed five runs in five May starts covering 27 1/3 innings after recovering from a hamstring strain during his second start.

Nick Gordon and Trevor Larnach hit the Twins' first consecutive solo homers of the season in the fourth as Minnesota gained a four-game split.

"I would say we've been doing pretty good this season, from top to bottom," said Gordon, who replaced Royce Lewis in center field in the fourth after an injury. "Anything can happen, and that's always exciting. We've been working out well. Man, Trev looks so good right now, he's swinging the bat."

Minnesota recalled Lewis, one of the team's top prospects, from Triple-A St. Paul before the game and optioned Juan Miranda to Triple-A. Lewis was making his first major-league start in center field when he crashed hard into the wall to make a catch in the third.

Lewis, 22, was down for a while and was replaced before the next inning due to right knee pain. He missed last season after ACL surgery on his right knee. Baldelli said Lewis was also getting an MRI and is likely bound for a stint on the injured list.

Lewis, a natural shortstop, hit .308 with two homers in 11 games for the Twins earlier in the month when Carlos Correa missed time. He was optioned to St. Paul with the idea of getting playing time in other spots to make him more valuable. He appeared at shortstop, third base, left field and center field in 10 games in Triple-A since being optioned on May 18.

Royals: Salvador Perez was back at catcher in his second game back from missing 11 days with a left thumb sprain.

Royals: RHP Jonathan Heasley (0-2, 4.73 ERA) will start for Kansas City in the opener at Cleveland on Monday. Heasley has allowed three runs in five innings in each of his last two starts. The Guardians counter with RHP Zach Plesac (1-4, 5.40).

Twins: RHP Dylan Bundy (3-2, 4.54) will face Detroit for the second straight start as Minnesota opens a five-game road series Monday against the Tigers. Bundy has allowed one run in 8 2/3 innings since missing time due to COVID-19. Detroit is scheduled to start RHP Beau Brieske (0-4, 5.04).