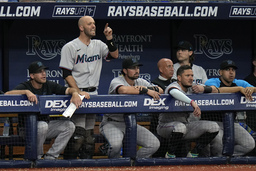 ST PETERSBURG, Fla. (AP) Harold Ramirez homered in a five-run first inning, Colin Poche struck out Jesus Aguilar to strand the bases loaded in the ninth and the The Tampa Bay Rays held on for a 5-4 victory over the Miami Marlins on Wednesday night before another small crowd at Tropicana Field.

Drew Rasmussen (5-1) won his fifth straight decision over six starts, giving up three runs and six hits in five innings with seven strikeouts. It was the first time in six starts he gave up more than one run.

Down by five runs early, Miami closed with three runs in the fourth.

"The bullpen kept us in the game," Marlins manager Don Mattingly said. "That's one thing I liked about this game because it was one of those games that can get away from you."

Brian Anderson singled leading off the ninth, and throwing errors by third baseman Taylor Wells and shortstop Wander Franco gifted Miami an unearned run. Garrett Cooper's two-out walk loaded the bases, and Poche struck out Aguilar on a 94.9 mph pitch for his third big league save, his first since Sept. 23, 2019.

Franco hit an RBI double in the first for his third hit in 41 at-bats and scored on Randy Arozarena's two-run double.

"Hopefully much more to come," said Franco, who has been slowed by minor injuries. "I'm just looking for pitches I can hit and making sure I hit those pitches.".

Ramirez followed with his second home run this season.

Jorge Soler led off the fifth with his ninth home run, the first of four straight hits off Rasmussen that included Jacob Stallings two-run double.

Soler hit a long drive to left in the eighth off J.P. Feyereisen that initially was called a home run by third base umpire Dan Iassogna, then was changed to a foul after umpires huddled in a call upheld by a video review.

Mattingly said the initial call should have remained in place, leaving the Rays to call for a review.

"I watched it on replay and I can't tell whether it was fair or foul," Mattngly said. "The problem is that one guy calls it fair, and they overturn it, and now the replay has to overturn that."

It would have been the first earned run of the season off Feyereisen, who struck out all three batters he faced in his 18th relief appearance.

"Anytime you get three strikeouts, it"s a good inning," Feyereisen said, "but I would rather have a nice relaxing 12-pitch inning than work for more punchouts."

Tampa Bay's Manuel Margot, activated after spending 10 days on the injured list with a strained right hamstring, extended his hitting streak to 12 games with an infield single in the fourth. Right-hander Dusten Knight was optioned to Triple-A Durham.

Marlins: RHP Anthony Bender went on the 15-day IL with back stiffness. ... The contract of INF Willians Astudillo was selected from Triple-A Jacksonville ... 2B Jazz Chisholm missed a second straight game due to a sore left hamstring.

Rays: RHP Pete Fairbanks, on the 60-day IL all season with a right lat strain, is scheduled to throw off the mound for the first time on May 31. ... RHP Luis Patino (left oblique strain) threw 25 pitches in a side session.