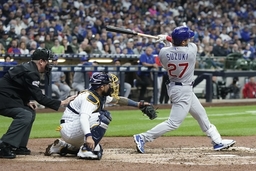 Patrick Wisdom homered as the Cubs ended a four-game losing streak. They had been outscored 20-2 in dropping the first two games of the series at Milwaukee.

Stroman (1-3) earned his first win for his new team in his fifth start. Pitching on his 31st birthday, he struck out five and walked one.

"I thought he threw really good," Cubs manager David Ross said. "I think that's the version of (himself) that he expects, that we've seen over the course of his career. He really controlled the tempo and looked really good."

Burnes (1-1) struck out 10 in seven innings, giving up four hits. He retired the first 13 batters before Wisdom homered in the fifth.

The Cubs added a run in the sixth when Alfonso Rivas singled and scored on a double by Seiya Suzuki.

"For the most part, we did what we wanted to do," Burnes said. "Wisdom is a good low ball fastball hitter, so it was one of those pitches he's not going to miss. Definitely a mistake there then three bad curveballs to Suzuki and he finally hit one down the line. Other than that, it was pretty good."

Chicago reliever Rowan Wick got two outs in the eighth and David Robertson closed for his fifth save.

Stroman signed a three-year, $71 million contract to join the Cubs last December. He celebrated his birthday with a win.

"Better than a birthday cake," Stroman joked after the game.

After holding Milwaukee to a run over five innings in his Chicago debut on April 10, Stroman had gone 0-3 with an 8.79 ERA over his next three starts before finally settling in and finding his groove on Sunday.

"He's been working his tail off in between starts and it's finally starting to come around, come together," catcher Yan Gomes said. "He's full of confidence on the mound and this outing showed it."

Robertson finished a game for the seventh time in nine appearances this season. But despite that workload and his long track record as a closer, Ross isn't ready to officially appoint him into that role with the Cubs just yet.

Instead, Ross plans to mix-and-match Robertson with fellow right-handers Mychal Givens and Wick, who picked up his first save of the season last week against the Braves.

"We're going to use (Robertson) in high-leverage situations," Ross said. "But I have a lot of confidence in Rowe and I love Givens with right-handed traffic. There are different areas for different guys. The back end is going to be a couple of those guys."

With a Sunday evening deadline to reduce roster sizes to 26 players, Milwaukee optioned infielder Mike Brosseau and catcher Alex Jaxson to Triple-A Nashville after the game.

Brosseau appeared in 15 games for the Brewers and batted .250 (7 for 28) with a home run and four RBIs. Jackson, went 2 for 7 in seven games since he was called up when Victor Caratini was placed on the COVID-19 IL.

Cubs: LHP Wade Miley (left elbow inflammation) threw a bullpen session Sunday and could head out on a rehab assignment sometime in the next week.

Brewers: INF Luis Urias (left quad) went 0 for 3 Sunday as he continued his minor league rehab assignment with Double-A Biloxi. Brewers manager Craig Counsell said the team will discuss the next steps for Urias, who's been sidelined since the second game of spring training, during the off-day Monday.

Both teams will get the day off Monday and return to action Tuesday when the Cubs send LHP Drew Smyly (1-2, 2.79 ERA) to the mound against the crosstown rival White Sox (RHP Michael Kopech (0-1, 1.42). RHP Brandon Woodruff (2-1, 5.30) leads the Brewers resume their homestand against RHP Vladimir Gutierrez (0-4, 7.41) and the Cincinnati Reds.