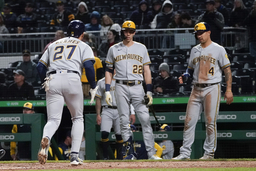 Adames hit a two-run blast in the first inning and a three-run drive during a six-run sixth for the NL Central-leading Brewers. It was the first multi-homer game of his career. He added a two-run double in the fifth and finished 4 for 5, raising his batting average 45 points to .239.

The game was tied 4-4 in the sixth when Rowdy Tellez singled with one out off reliever Aaron Fletcher (0-1). Tyrone Taylor followed with a triple and came home on a single by Omar Navaez.

Adames had five RBIs in his first 17 games of the season, and no more than one in a game. His previous career high for a game was four.

Brent Suter (1-0) allowed Kevin Newman's game-tying two-run single in the fifth in relief of starter Brandon Woodruff but wasn't charged with a run in two innings. Josh Hader entered with two on and two out in the ninth and struck out Tucupita Marcano for his ninth save, which leads the majors.

Ke'Bryan Hayes went 3-for-3 and scored twice for the Pirates, who fell to 0-4 against Milwaukee this season.

Pittsburgh starter Mitch Keller allowed four runs on five hits in 4 2/3 innings. He walked two and struck out one.

After the Brewers' big inning, the Pirates got back within 10-7. Michel Chavis had a sacrifice fly in the seventh, and in the eighth, Hayes had a sac fly and Daniel Vogelbach had an RBI groundout.

Milwaukee entered the game ranked 28th in the majors in batting average and tied for 23rd in runs scored.

"It's an exhale, for sure, just to put a big number of the board," manager Craig Counsell said. "We're going to be better offensively than we've been. Tonight was a night we needed it. There's going to be games like that. We've pitched so well. It was nice to have a big night on offense."

Brewers designated hitter Andrew McCutchen stole his 200th career base in the ninth inning - in the same ballpark where he stole his first, back in 2009 with the Pirates. He had five 20-steal seasons for Pittsburgh and 93 of his swipes have come at PNC Park.

"It was nice being able to get it done here," McCutchen said. "When the beginning of my career started, I really felt like I would get 200 pretty easily. ... The game changed."

Pirates: OF Bryan Reynolds and INF Cole Tucker were placed on the COVID-19 injured list. ... LHP Anthony Banda (illness) was placed on the 10-day IL retroactive to April 23. ... Newman was removed from the game with left groin tightness in the seventh inning.

Marcano and Suwinski drove from Akron, Ohio, to Pittsburgh in rental car just in time to make batting practice. Suwinski made his major league debut, went 1 for 5 and scored a run.

"I don't think it all has hit me yet," Suwinski said. "I haven't stopped moving since the morning."

LHP Aaron Ashby (0-2, 3.18 ERA) will start for the Brewers on Wednesday. Three of his four appearances this season have been in relief. RHP Bryse Wilson (0-0, 6.35) is scheduled to start for the Pirates.