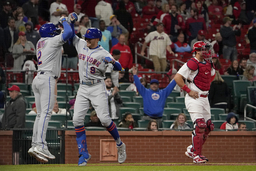 ST. LOUIS (AP) Pinch-hitter Dominic Smith hustled for an infield single that drove in two pivotal runs, and the New York Mets capitalized on an uncharacteristic error by Gold Glove third baseman Nolan Arenado to rally for five runs with two outs in the ninth inning of a 5-2 victory over the St. Louis Cardinals on Monday night.

After the hit by Smith gave New York the lead, Brandon Nimmo capped the outburst with a two-run homer.

"It was worth the wait," Mets manager Buck Showalter said. "It really was. It was fun to watch."

Max Scherzer struck out 10 over seven innings of two-hit ball in a scoreless duel with Cardinals starter Miles Mikolas. A two-run single by Tyler O'Neill off Trevor May (1-0) put St. Louis ahead in the eighth.

New York was down to its final strike when Mark Canha hit a grounder to third. Arenado, awarded a Gold Glove in each of his nine major league seasons, fielded the ball cleanly behind the bag but took his time making an off-balance throw to first.

The ball sailed high for an error that allowed Eduardo Escobar to score from second, making it 2-1. Canha was credited - curiously - with an infield single.

But closer Giovanny Gallegos (0-1) was late covering first, and Smith beat him to the bag with a headfirst dive.

"You try to hustle as hard as you can to beat him. I saw the closer didn't get over right away," Smith said. "I just ran as hard as I could. I knew I had a step on him. I felt slow but I tried to run hard."

McNeil never stopped coming around third and slid in safely at the plate ahead of Gallegos' throw, giving the fired-up Mets a 3-2 lead.

"Dom probably ran the fastest 90 (feet) of his life there," McNeil said. "I knew it would be close at first base. I ended up scoring. It was a lot of fun."

Not for St. Louis, after Gallegos' gaffe proved costly.

"It's pretty simple. We're going to make physical mistakes. That's a mental mistake there," manager Oliver Marmol said. "You can't excuse it. He knows it. We know it. He's got to cover first."

Nimmo then lofted the first pitch from lefty reliever T.J. McFarland over the fence in the right-field corner.

"A lot of good things went into that ninth," Showalter said.

Edwin Diaz struck out two and earned his second save, rebounding after he gave up a tying homer with two outs in the ninth inning Friday night at Arizona.

Pitching in his hometown, Scherzer reached double digits in strikeouts for the 106th time - which ranks fifth on the career chart. In his first season with the Mets since signing a $130 million, three-year contract, the three-time Cy Young Award winner has 33 strikeouts and eight walks in 25 innings.

"Tip your hat off to Miles tonight," Scherzer said. "That's baseball. It was a great game. Sometimes you run into a buzz saw and he did his job tonight. I'm pitching on pins and needles there. I have to make every pitch. I was thinking even a solo shot might lose it."

Mikolas also pitched seven shutout innings in his fourth start of the season. He scattered four hits and walked one. The right-hander has allowed just one earned run in his last three starts covering 20 2/3 innings.

Canha was hit by a pitch in the second. The Mets have been hit by 15 pitches this year, which leads the majors.

Mets: RHP Adonis Medina was optioned to Triple-A Syracuse and RHP Yoan Lopez was recalled. In his last outing, Medina struck out the side in a perfect eighth inning Saturday against the Diamondbacks.

Cardinals shortstop Paul DeJong received his second of two scheduled days off. The 28-year-old DeJong is stuck in an 0-for-11 slump with five strikeouts in that span. He finished the recent road trip with just two hits in 21 at-bats. In 12 games this season, DeJong is hitting .139. He had a solid spring training, batting .435 (10 for 23) with two home runs in Grapefruit League play. Edmundo Sosa started Sunday in Cincinnati and Monday against the Mets.

Mets: RHP Taijuan Walker (right shoulder bursitis) threw about 65 pitches in a simulated game Monday afternoon. If there are no complications, Walker likely will return to the rotation Saturday against Philadelphia. He left his season debut early on April 11 and has not appeared in a game since. ... After the game, the Mets said injured ace Jacob deGrom had an MRI and CT scan that "revealed considerable healing of the stress reaction on his scapula." The two-time Cy Young Award winner was cleared to begin "loading and strengthening" of his right shoulder and will undergo another MRI in about three weeks. He is expected to be sidelined until at least June.

Cardinals: Team president John Mozeliak said RHP Jack Flaherty (right shoulder inflammation) continues to make rehabilitation progress. "It's just something we're going to have to be patient with, and fingers crossed that he's going to be a key contributor to this rotation," Mozeliak said.