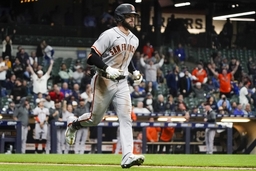 MILWAUKEE (AP) Luis Gonzalez hit his first major league homer, a two-run drive with two outs in the ninth inning that sent the San Francisco Giants over the Milwaukee Brewers 4-2 on Monday night.

The Giants went 8-3 on their four-city trip and made the most of their one-game visit to Milwaukee. This matchup was part of a makeup for a series postponed because of the lockout, and San Francisco will return for a doubleheader in September.

"It's a group that really stayed together through a long, arduous and challenging trip," Giants manager Gabe Kapler said.

Gonzalez connected after Wilmer Flores drew a two-out walk from Jake Cousins (2-1). Gonzalez, a 26-year-old outfielder, is technically still a rookie after brief stints in each of the past two seasons with the Chicago White Sox.

"I was just trying to get a good pitch to hit, something to handle and something to drive in the gap and it ended up going over the fence," Gonzalez said. "Just really happy. I wish my family was here to witness it, but I'm sure they are really stoked back at home. It's just incredible. I'm just loving life right now."

Joc Pederson hit his sixth homer for the Giants. The San Francisco newcomer homered twice and doubled Sunday in a win at Washington.

Pederson put the Giants ahead 2-1 when he homered in the eighth after a two-out double by Curt Casali off Trevor Gott.

Pederson's homer came as fans sitting near the Giants dugout loudly heckled him.

"I heard them talking and I stepped out and then I heard them talking again. A lot of chitter chatter," Pederson said. "It's nice to help the team and do what you can to win a ballgame. That's what makes it fun. The interaction with the fans and adding a little pressure, I enjoyed it."

The Brewers tied it in their half on Willy Adames' towering homer into the left-field bullpen off Jake McGee (1-1).

Camilo Doval, the eighth Giants pitcher, threw a scoreless ninth to record his fourth save in five attempts.

The Brewers got another stellar outing from reigning Cy Young Award winner Corbin Burnes, who pitched 6 2/3 shutout innings, giving up two hits while striking out 11. Burnes recorded double-digit strikeouts for the second consecutive game. He struck out 10 on April 19 against the Pirates.

Burnes struck out the first two batters in the seventh before Gonzalez singled. Gott replaced Burnes, who departed to a standing ovation. Gonzalez was caught stealing to end the inning.

The Brewers scored in the second when Keston Hiura led off with an infield single and eventually scored on Mike Brosseau's single. But the team's offense remained stagnant a day after defeating the Phillies despite scoring only one run.

"We just don't have many guys feeling good," Brewers manager Craig Counsell said. "I think we're missing some pitches to hit. The offense has been a little dry."

Giants: INF/OF Luke Williams was recalled from Triple-A Sacramento to fill the roster spot of OF Mike Yastrzemski, who was placed on the COVID-19 injured list on Sunday. . RHP Anthony DeSclafani, who is on the 10-day injured list, traveled to Green Bay, Wisconsin, on Monday to meet with ankle specialist Dr. Robert Anderson. "He got an MRI and has inflammation in his right ankle," Kapler said. "He's going to throw again in a week. It's just going to be rest and recovery."

Brewers: INF Luis Urias (left quadriceps), who has been on the injured list since the start of the season, is on a rehab assignment with Double-A Biloxi. In two games, he has had two hits in eight at-bats. "He's healthy. We've just got to get him at-bats," Counsell said of Urias, who is expected to be the team's primary third baseman when he returns.

Kapler spoke glowingly of Gonzalez's clutch homer. "Just aesthetically, it was really pretty," he said. "Very beautiful swing and the majestic flight of the ball. It was really cool moment for our club."

Both teams traveled to Milwaukee on Sunday for their brief stay, the Giants after defeating the Nationals in Washington and the Brewers after winning at Philadelphia. Monday's game drew an announced crowd of 21,186 despite the unusual 5:10 p.m. start time.

"No choices were good in this situation, for us or the Giants," Counsell said.

"The baseball schedule blends together. I'm not always sure what day of the week it is," Kapler said. "You come to the ballpark, you prep for the game, you've got a good understanding of all the teams around the league."

Giants: RHP Daulton Jeffries (1-2, 1.17 ERA) will pitch on Tuesday as San Francisco opens a two-game set at home against the Oakland A's.

Brewers: RHP Brandon Woodruff (2-1, 4.30) will start for Milwaukee on Tuesday in the opener of a three-game series against the Pirates in Pittsburgh. Woodruff is 5-2 with a 3.74 ERA in 11 career games (nine starts) vs. the Pirates.