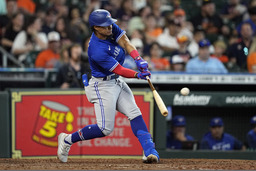 HOUSTON (AP) George Springer was greeted with a rousing ovation from the home crowd as he approached the plate in his first game against the Houston Astros, his former team.

Moments later Springer used his bat to say thanks, slugging a leadoff homer to help the Toronto Blue Jays to a 3-2 win Saturday.

"It's pretty emotional," Springer said. "I don't really know how to explain it. It's weird. It's cool at the same time. But I'm just glad I can help us win."

Santiago Espinal homered for the second straight game for the Blue Jays to send the Astros to their fourth loss in a row.

The game was tied at 2 with one out in the seventh inning when Espinal, who hit his first homer this season in a win Friday night, connected off Blake Taylor (0-1).

The Blue Jays lead the majors with 20 home runs after clubbing four in the first two games of this series.

"This is the first time we've seen him," manager Dusty Baker said. "He has good stuff, he has real good stuff, and when you're not hitting everybody seems like they've got good stuff. But he indeed had good stuff."

Kyle Tucker hit a leadoff single in the Houston ninth, but Adam Cimber struck out Nico Goodrum before pinch-hitter Aledmys Diaz lined into an unassisted double play. Cimber got his first save.

Alex Bregman hit a two-run homer for Houston in the first inning, but the Astros couldn't string much else together. Michael Brantley and Tucker each had three hits for Houston, but the bottom three in the order went 0 for 11 with six strikeouts.

Springer, the 2017 World Series MVP who spent his first seven MLB seasons with the Astros, was injured when the Blue Jays came to Houston last year and missed Friday's game after being hit on the wrist by a pitch Wednesday night.

The Astros even played Travis Scott's "Butterfly Effect," a favorite walkup song of Springer's during his time with the team, as he approached the plate for his first at-bat.

Springer then sent Jose Urquidy's fifth pitch into the bullpen in right field to give Toronto an early lead. Springer smiled as he left the batter's box and raised his right arm in triumph as the ball dropped into the bullpen.

"That was pretty cool," manager Charlie Montoyo said. "That's not easy to do. The excitement - then hit a ball out, opposite field, that was great. Good for him, and for us."

Baker said the performance of Springer, who hit 174 home runs as an Astros, was "nothing new."

"He got cheers the first time up and then he hit a homer and then the cheers sort of subsided through the rest of the game," Baker said. "We love George, but we love the Astros better."

Vladimir Guerrero Jr. and Lourdes Gurriel Jr. hit consecutive singles with one out in the inning before Alejandro Kirk walked to load the bases. But Urquidy retired Raimel Tapia to escape the jam.

Brantley hit a one-out single in the bottom of the inning before Bregman hit his homer into the first row of the seats in left field to put Houston on top 2-1.

Neither team could get much going offensively for the next few innings before Bo Bichette singled to start the sixth. Guerrero then singled on a ball that sailed just over the head of Goodrum's leap at second base.

The Blue Jays tied it on a sacrifice fly by Gurriel that dropped when Goodrum and rookie shortstop Jeremy Pena collided attempting to catch it. Goodrum was shaken up on the play but stayed in the game after a short visit from Baker and a trainer.

Urquidy allowed six hits and two runs while walking one in 5 2/3 innings.

Blue Jays: LHP Hyun Jin Ryu (forearm inflammation) has increased the intensity in his throwing program and is throwing from 120 feet. ... RHP Nate Pearson (mononucleosis) threw live batting practice Saturday with no issues. The team will see how he recovers from the work before determining his next step.

Astros: 2B Jose Altuve (strained left hamstring) took ground balls on the field Saturday and said afterward that he was feeling good. Altuve, who was placed on the injured list Tuesday, said he hasn't hit since he was injured and isn't sure of his next steps. ... Closer Ryan Pressly (knee) is improving and is set to face hitters before Sunday's game.

Yuli Gurriel was presented with his Gold Glove award and the Astros received a Gold Glove for being the best defensive team in the AL last season in a pregame ceremony. Yuli was greeted by his younger brother Lourdes, who gave him a big hug, before Yuli received his award.