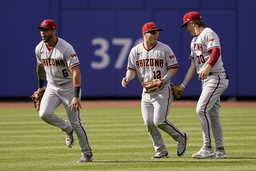 "I said I felt like we haven't won a baseball game here in a long time," Diamondbacks manager Torey Lovullo said, recalling a postgame conversation with a team staffer. "I was proud of our guys. We played hard. It's a tough environment for a young team."

On Saturday, the Diamondbacks - who entered the game with 18 runs this season, second-fewest in the majors ahead of only the Baltimore Orioles - squandered a bases-loaded opportunity against Carlos Carrasco in the fourth before breaking through against Joely Rodriguez (0-1) and Seth Lugo.

Seth Beer led off with an infield single against Rodriguez, and Lugo struck out Carson Kelly before Alcantara homered to right field.

"I felt the entire dugout took a big exhale (and) said OK, good, we're in the lead and playing some downhill baseball," Lovullo said.

Daulton Varsho followed with a walk and scored - after running through a stop sign by third base coach Tony Perezchica - on Marte's double down the first-base line.

Lugo has given up multiple runs in two appearances this season after surrendering two or more runs 12 times in 120 relief outings from 2019-21.

"We've been spoiled by him for a long time here," Mets manager Buck Showalter said. "He's pitched some very meaningful innings for us this year. He will again. Just wasn't his day."

The Mets pulled within a run in the eighth when Jeff McNeil singled with one out and Starling Marte - whose throw wide of the plate helped Varsho score the third run - homered to left. Ian Kennedy walked Francisco Lindor before Pete Alonso hit into a 6-4-3 double play.

Mark Melancon struck out two in a perfect ninth as he earned his first save with the Diamondbacks and preserved the win for Sean Poppen (1-0), who retired all four batters he faced in the sixth and seventh.

Diamondbacks starter Zac Gallen surrendered two hits and a walk while whiffing two in four innings in his season debut, which was delayed due to issues with his shoulder and thumb.

Arizona outfielders David Peralta and Varsho made sliding catches in the sixth inning to take hits away from Starling Marte and Pete Alonso. It was payback for Varsho, who lost out on base hits when Alonso dived for his grounder in the third and McNeil made a leaping catch at the wall on his fly in the fifth.

Beer finished with three hits and a walk in four plate appearances. Ketel Marte had two hits. McNeil was the only Mets player with two hits.

Mets: OFs Brandon Nimmo and Mark Canha remained on the COVID-19 injured list, and Dick Scott joined the team to replace bench coach Glenn Sherlock, who is also out due to virus protocols. ... RHP Trevor May tossed a one-hit eighth inning in his first appearance since Monday, when he exited against the Philadelphia Phillies due to a triceps strain.