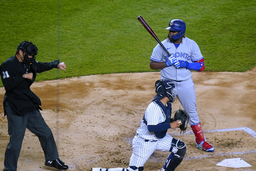 Guerrero struck out four times in all for the first time in his career, a night after hitting three homers and going 4 for 4.

"It's a tough call," Boone said of pulling Chapman. "I felt he could have gotten out of it."

In the first save opportunity of his big league career, King struck out George Springer on three pitches, throwing a fastball for a called third strike.

"A ton of adrenaline and then knowing you have to execute," King said.

With Guerrero in the on-deck circle, Bo Bichette took a called strike, then hit a soft liner to second baseman DJ LeMahieu, who threw to first to double off Chapman for the final out. The Yankees shut out Toronto for the second time in the four-game series.

"He was tremendous," Boone said. "Obviously coming up against the guys he was coming up there, to do what he did there with Springer was huge and then gets ahead of Bo there and gets some soft contact.

"It made you nervous like it was headed for the outfield, but DJ looked like he got a really good read on it and turned a really nice double play on it."

King's escape act continued a strong start for New York's bullpen. The Yankees closed out their first homestand with a 1.30 ERA through their first 34 2/3 innings.

Following a 95-minute rain delay, Severino got his first win as a starting pitcher since Sept. 22, 2019, also against Toronto. He threw 83 pitches, 18 more than his season debut on Saturday against Boston and he averaged 97.4 mph for 33 fastballs.

"Trevino, (pitching coach Matt) Blake and I did a very good job of trying to look at the weakness (of Guerrero)," Severino said. "He's a great hitter. So every time you can contain him that's great."

Jose Trevino hit RBI singles in the third and fifth inning off Kevin Gausman (0-1) and Isiah Kiner-Falefa also had three hits and scored on Trevino's hits. New York's Nos. 8-9 hitters entered 4 for 43 with one RBI.

Giancarlo Stanton added an RBI groundout in the eighth.

Guerrero struck out in the first on a changeup, took a called third strike on a cutter on the outside corner in the third and whiffed on another Severino changeup in the fifth. He struck out on a slider from Holmes opening the eighth.

"You got to give Severino credit, he had the stuff today," Toronto manager Charlie Montoyo said.

Gausman allowed two runs and six hits in 5 2/3 innings. He struck out nine and walked none.

Blue Jays: OF Teoscar Hernandez was placed on the 10-day IL with a left oblique strain and manager Charlie Montoyo is optimistic it will be a short absence. Hernandez was injured in the sixth inning on Wednesday. . RHP Ryan Borucki (strained right hamstring) will throw one inning in a simulated game at the spring training complex in Dunedin on Friday. . INF Gosuke Katoh was recalled from Triple-A Buffalo to replace Hernandez