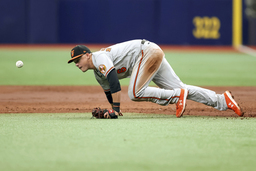 ST. PETERSBURG, Fla. (AP) As much as the Tampa Bay Rays wanted Corey Kluber to have a shot at getting the victory in the pitcher's debut with his new team, keeping the two-time Cy Young Award winner fresh and healthy is a bigger priority.

The 36-year-old right-hander looked good in his first game since joining the defending AL East champions, pitching 4 2/3 scoreless innings in an 8-0 victory that completed an opening sweep of the Baltimore Orioles on Sunday.

"I didn't really control counts the way I'd like to eventually," Kluber said. "But at the end of the day, I made good pitches when I needed to to keep them off the scoreboard."

Brandon Lowe hit a two-run homer off Tyler Wells (0-1), while Wander Franco had his second three-hit game in three days and drove in a pair of runs as the Rays beat the Orioles for the 15th straight time and matched the fastest start to a season in club history.

Coming off a 110-loss season, Baltimore is 0-3 for the first time since 2007. The Orioles never led in the series, struck out 37 times - most through three games of a season in franchise history - and went 2-for-24 with runners in scoring position.

"They have really good pitching, but we didn't do a very good job swinging the bats. We didn't make them work much," Orioles manager Brandon Hyde said. "We can improve our two-strike hitting, put more pressure on their defense. We have some guys scuffling early. I'd like to see them break out. We're putting too much pressure on ourselves."

Kluber, pitching on his birthday for the first time in his career, allowed three hits, walked four and struck out five in an 87-pitch outing. Sailing along with a 4-0 lead, he retired the first two batters in the fifth inning before walking Cedric Mullins and giving up a single to Ryan Mountcastle.

Manager Kevin Cash, who said before the game that one of his priorities this season will be managing Kluber's workload and keeping the oldest player on his roster healthy, didn't hesitate to turn to the bullpen.

Kluber went 5-3 with a 3.83 ERA in 16 starts with the New York Yankees last season, when he also spent three months on the injured list with a right shoulder strain. The Rays signed him to an $8 million, one-year deal during the offseason.

"We'd like all of our guys to get out there and pencil in 30 starts. But saying that, you have to manage the workload," Cash said.

"I don't want to put words in his mouth, but the days of throwing 220 innings are probably not there any more," the manager added. "He understands that."

Kluber, who won Cy Young Awards with Cleveland in 2014 and 2017, wasn't upset with the manager's decision.

"I don't really concern myself with the workload or pitch count. I view it as I'm going to keep going out there until he takes the ball from me," Kluber said. "I try to take it hitter by hitter and not try to look at the big picture like that."

Lefty Jeffrey Springs (1-0) came on to get the only batter he faced to end the fifth. Jason Adam, Jalen Beeks and Matt Wisler held the Orioles scoreless the rest of the way, finishing a combined six-hitter.

Wells made his first major league start for the Orioles and didn't get through the second inning. The Rays loaded the bases with two walks and an infield single, then chased the 27-year-old right-hander with Mike Zunino's sacrifice fly, Manuel Margot's RBI grounder and Lowe's 437-foot homer to right-center.

Franco's two-run single highlighted a four-run seventh against relievers Bryan Baker and Paul Fry. Franco joined Quinton McCracken in 1998 and Steve Cox in 2001 as the only Rays with muiltiple three-hit games during the first three games of a season,

Wells, 2-3 with a 4.11 ERA in 44 relief appearances as a rookie last season, threw 54 pitches and allowed four runs and three hits. He walked two and struck out two.

Orioles: Hyde said right-handed reliever Dean Kremer strained his left oblique muscle warming up in the bullpen during the game.

Rays: CF Kevin Kiermaier was not in the lineup, however Cash said it was a day of rest and not related to injury. The team is beginning the season with a stretch of 13 games in 13 days.