Luzardo strikes out 11 to lead Marlins past Phillies 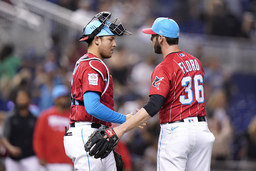 Miguel Rojas had two hits for the Marlins (66-95), who moved one game ahead of last-place Washington in the NL East.

Acquired from the Oakland A's for Starling Marte on July 30, Luzardo (6-9) gave up one run and six hits in 5 1/3 innings. The left-hander also walked twice and scored the lead run on Chisholm's shot.

"My first innings have not been that great and today I had a pretty good first inning," Luzardo said. "My bullpen was not that good, but when I got to the game I felt it with the first guy I faced."

Luzardo was removed after striking out Bryce Harper to lead off the sixth. Harper went 1-for-4 with three strikeouts. The National League MVP contender reached on a bunt single, his fourth of the season.

"Great hitter, he's a guy I want to go after and attack," Luzardo said. "You just go out there and give it my best stuff and today, thankfully, it worked out well."

"We were considering letting him go further," Mattingly said. "He had a great start and once he gets Bryce we decided right there's the time."

Anthony Bass got the final two outs of the sixth and Richard Bleier followed with a perfect seventh. Anthony Bender pitched a scoreless eighth and Dylan Floro closed with a scoreless ninth around a single for his 14th save.

"He's got good stuff," Phillies manager Joe Girardi said of Luzardo. "His fastball seems to get on hitters pretty good and plays up. His curveball, even though it doesn't have a lot of depth, seems to be deceptive. I saw him pitch a couple of years ago when he was with Oakland and I was pretty impressed."

Chisholm's three-run blast in the third put Miami ahead 3-0. Chisholm drilled a change-up from Philadelphia starter Hans Crouse into the right-field seats for his 18th homer.

"First at-bat, me and my coach talked about how I was a little jumpy towards (Crouse)," Chisholm said. "I just sat there saw my pitch, waited for it and got the pitch. And I didn't miss it."

The Phillies scored their run on Matt Vierling's RBI single in the fifth.

"I'm very fortunate to be here and the Phillies thinking highly of me to give me a chance at the end of the season to show them what I can do heading into next year," Crouse said.

The first to admit his early tenure with the Marlins has been rough, Luzardo at least will take into the off-season that his final start of 2021 was his most productive with the club. Luzardo finished 4-5 and had an 6.87 ERA in his 12 outings with Miami.

"I don't think my time here reflects the type of pitcher I can be," Luzardo said. "I think I had a tough year and struggles while I was here, finishing like that was such a high note. I'll take that into the off-season. It's definitely a lot of motivation."

Fifteen-year-old Jonah Handler, a survivor of the condo building collapse in Surfside, Fla. June 24, threw the ceremonial first pitch before the game. Handler is a varsity baseball player at Monsignor Edward Pace High in nearby Miami Gardens and talked with Marlins infielders Rojas and Chisholm during batting practice.

The Phillies have not announced a starter for the season finale Sunday while the Marlins will go with RHP Pablo Lopez (5-5, 3.03). Lopez has been sidelined since July 11 because of a right rotator cuff strain.