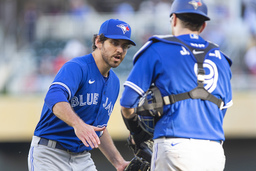 The Blue Jays launched five homers while Alek Manoah allowed one hit over seven innings to help Toronto close within one game of wild card co-leaders Boston and the New York Yankees.

"It's October baseball and we're trying to make a push," Manoah said. "We're just focused on controlling what we can control."

Toronto remained tied with Seattle after the Mariners rallied to beat the Angels 6-4 later Saturday. Both teams need a win and a loss by either the Red Sox or Yankees on Sunday to force one of several tiebreaker scenarios Monday.

The Blue Jays are 2-0 to start October after going 20-9 in September.

"The level of confidence that we're playing with right now is amazing," Manoah said. "Everything is kind of clicking, our bullpen, our starters, our offense."

George Springer, Teoscar Hernandez, Bo Bichette and Danny Jansen all went deep for Toronto. The Blue Jays lead the majors with a franchise-record 258 home runs, topping the 257 they hit in 2010.

Guerrero grimaced after stepping awkwardly while rounding first base on a double in the sixth inning. He was checked by trainers but remained in the game.

"He said he rolled his ankle a little bit so he felt uncomfortable," Blue Jays manager Charlie Montoyo said. "He was fine after that."

Guerrero flied out to end the eighth and was replaced at first base by Cavan Biggio in the ninth.

Trey Mancini doubled to begin the second and scored on Ryan McKenna's RBI groundout but that was all for the Orioles against Manoah. Nick Ciuffo walked to begin the third and Manoah hit Austin Hays to open the fourth, but neither runner advanced.

Manoah (9-2) retired the final 12 batters he faced and struck out 10. The rookie has a 1.69 ERA in winning his past four starts - his streak includes two wins over Tampa Bay, the AL's best team.

Springer had four hits and scored twice. Santiago Espinal had three hits and an RBI as Toronto collected 14 hits, the 71st time this season they've had 10 or more.

With his 450-foot drive off John Means (6-9) in the first, Guerrero closed within one of Kansas City's Salvador Perez for the major league lead.

"They gave me the pitch I was looking for, what I was working on in BP, and I took advantage of that," Guerrero said through a translator.

Hernandez hit a solo shot off Means in the first, his 32nd, and Springer hit a three-run homer off Means in the second, his 20th. Springer is among seven Toronto players to hit 20 or more home runs this season, joining Guerrero, Hernandez, Marcus Semien, Bichette, Randal Grichuk and Lourdes Gurriel Jr.

Bichette hit a first-pitch homer off Konner Wade to begin the fifth, his 29th, and Jansen added a two-run drive later in the inning, his 11th.

Toronto became the fourth AL East team to reach 90 wins, making this the first division since three-division play started in 1994 with four 90-win teams. It's only the second since division play began in 1969 that it's happened - the 1978 AL East also had four 90-win teams with New York, Boston, Milwaukee and Baltimore.

"It's impressive, man," Montoyo said. "This team deserves so much credit, and we're going to go all the way to 162. I'm so proud of these guys."

"He's dealing with a little bit of an illness and it just felt like the fastball velocity wasn't quite there," Hyde said. "He just looked tired, to be honest with you."

The Blue Jays won 90 games for the seventh time in their history and the first time since 2015.

The game was delayed for several minutes after home plate umpire Chris Guccione left the field to receive medical attention following the top of the third inning. Guccione was eventually replaced by second base umpire Chris Conroy. Crew chief Mark Wegner remained at first base with Alan Porter at third.

Gurriel (right hand) returned to the lineup at DH after sitting out the past two games. Gurriel needed stitches to close a cut on his hand after being spiked by Grichuk on a play in the outfield on Sept. 23.