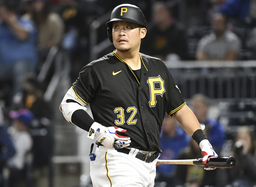 PITTSBURGH (AP) Justin Steele breezed through seven shutout innings and the Chicago Cubs scored six runs in the second inning Thursday night, beating Pittsburgh 9-0 and sending the Pirates to their 100th loss of the season.

Steele (4-4) struck out seven and gave up four hits on 76 pitches. The rookie left-hander, who hadn't gone more than five innings in eight major league starts, bounced back after allowing six runs and seven hits against the St. Louis Cardinals on Sept. 24.

"If you're going to ask me if I could've kept going or wanted the complete game, of course," Steele said. "That's just the competitor in me. I want to keep going. I don't know exactly how many pitches I was at, but I felt like I was at a manageable pitch count. Could've worked it out somehow, but there's people in the bullpen that have to get work in as well.

"Feels good to go out there and get seven shutout innings to end the year. It's a high note. It's something to definitely build off of."

"It's not good, especially as hard as we work, but we've just got to keep moving forward," Pirates manager Derek Shelton said. "I think we can use the entire year as motivation to be better next season. I don't think there is a specific number that accounts for that."

Sergio Alcantara drove in three runs, two coming on a homer to right off Miguel Yajure (0-2) that gave Chicago a 3-0 lead in the six-run second. Steele helped his own cause with a single and scored on a groundout by Frank Schwindel, Rafael Ortega took home on a double steal, Willson Contreras had an RBI double and Matt Duffy made it 7-0 with a single.

"He looked great. It was a nice note for him to finish on," Ross said. "Really strong outing for him. ... It's nice to be able to pitch freely when you have that kind of run support from the offense. Did a really nice job tonight."

The Cubs took the final two of the three-game series following a seven-game losing streak.

Chicago jumped on Yajure early, with Ortega driving the first pitch of the game 388 feet over the right-field wall for his 11th home run of the season.

"I was trying to find my rhythm, a good rhythm, and I couldn't find it," Yajure said. "That first inning was OK, and then the second was like wild. ... I learned that I have to take advantage of the opportunity. This time, I didn't take advantage, but I think you have to keep working.

"It made me feel so mad. I will do my best during the offseason to try to come back stronger."

David Bote and Alcantara had back-to-back RBI singles off reliever Tanner Anderson, extending the lead to nine runs in the fifth.

Cubs: Bote exited after the sixth inning. Ross said the second baseman felt something in his shoulder while in the on-deck circle in the seventh. Bote will be evaluated Friday. ... C Austin Romine was placed on the injured list with an undesignated injury.

Pirates: LHP Dillon Peters (lower back strain) was transferred from the 10-day IL to the 60-day IL.

Cubs: A starting pitcher has not been announced for the first of a three-game series at St. Louis on Friday.

Pirates: RHP Wil Crowe (4-8, 5.77) will take the mound Friday for the first of three games to close out the regular season against the Cincinnati Reds. Crowe gave up three runs on eight hits his last time out, against the Phillies on Sept. 25.