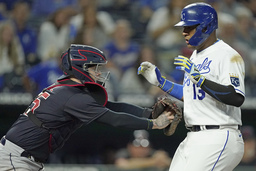 Royals star Salvador Perez, who left Wednesday's game after spraining his right ankle, started as the designated hitter and hit a double. He leads the majors with 48 home runs and 121 RBIs.

Bieber allowed one run on four hits, with one strikeout. The reigning AL Cy Young Award winner made his second start since returning from a three-month stay on the injured list.

"This whole process, the end goal has been to try and be as persistent and resilient as possible," Bieber said. "I want to go out there and do what I love to do, ultimately what I'm paid to do. It was nice to get back out there for a couple of sessions at the end of the year."

Bieber wanted to head into the offseason feeling positive. He was able to do that, even working his way out of a jam in the second.

"I didn't get as deep in the ballgame as I would like to," he said. "I felt good, healthy. I would have loved to (use) the fastball a little more, but I couldn't control it, so I had to tone it back. Tonight made me more hungry to get back to where I want to be," he said.

Acting manager DeMarlo Hale was pleased with what he got from Bieber.

"He struggled with his fastball command," Hale said, "but he made some pitches with his secondary pitches down in the zone. That's what he's capable of doing."

"I thought he was terrific," Royals manager Mike Matheny said. "He came out pounding the strike zone really good. I thought the breaking ball was sharp. It looked like he'd been here for a while, and that's hard to do. The stuff is going to play."

Zimmer had an RBI double and a pair of sacrifice flies.

Former Indians star Carlos Santana had two hits, including a single in the second that drove in Andrew Benintendi, who had doubled.

The Indians picked up a pair of unearned runs in the third. Roberto Perez reached on an error by third baseman Adalberto Mondesi, Oscar Mercado had an RBI double and Zimmer had a sacrifice fly.

Cleveland added a run in the sixth off reliever Dylan Coleman, who allowed his first earned run in his fifth major league appearance when Jose Ramirez tripled and Harold Ramirez singled.

Kansas City had a chance to score in the sixth when Perez led off with a double and Benintendi singled. But Perez was thrown out at the plate on a grounder and, after the Royals loaded the bases, Mondesi grounded into an inning-ending double play.

Indians: OF/DH Franmil Reyes was scratched from the lineup with neck stiffness. He has 10 home runs and 30 RBIs since returning from the injured list Aug. 18.

Royals: C Salvador Perez, who left Wednesday's game after spraining his right ankle entering the dugout after the top of second inning, was the DH. Matheny said he gave no consideration to having Perez behind the plate.

Royals LHP Daniel Lynch, who was hit in the right hand by a line drive Wednesday, was placed on the 10-day injured list with a bruise. His spot was taken by Zerpa. He was the sixth Royals pitcher to make his debut in 2021.

Royals: Will host the Twins for their final series. The Royals have not yet named a starter. The Twins will go with RHP John Gant (5-10, 3.74 ERA).