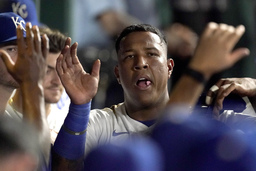 "We probably won't be the only team," Cleveland acting manager DeMarlo Hale said when asked if he will be glad when he doesn't have to see Perez again. "He's had an incredible year."

Perez's home run in the sixth inning gave the Royals the lead. But, the Indians came back to tie the game in the top of the eighth.

In the bottom of the eighth, Nicky Lopez tripled to the gap in left-center, scoring Whit Merrifield. Lopez scored on a wild pitch to give the Royals a two-run lead.

"(Reliever Brian Shaw) is obviously one of the better relievers in the game," Lopez said. "He has been for a while. Lefties don't like him very much because he has that cutter. I was fortunate enough to get it to 3-2 and put a good swing on the ball."

Josh Staumont (4-3) came on with two outs in the eighth and got the win. He was the seventh pitcher of the game for the Royals.

Blake Parker (2-1) took the loss for the Indians.

Brady Singer started the game for the Royals, but he didn't last long. He gave up three runs on three hits in 2/3 innings. After he delivered a pitch, second baseman Merrifield raced in from short right and motioned to the dugout. Singer was pulled with upper right arm discomfort.

"I threw a few sliders and the last one just got me," Singer said. "I've started to feel better and I'm not overly concerned about it."

Singer was replaced by Ervin Santana, the first of six Royals relievers who allowed one run in 8 1/3 innings.

"That's incredible," Kansas City manager Mike Matheny said. "It starts with Erv. It might be one of the toughest roles in baseball. You go 10 days without seeing the field and come in in situations like that and be able to get us into the middle part of the game."

The Indians scored three runs in the first. Myles Straw led off with a double, Amed Rosario walked and Jose Ramirez singled. Franmil Reyes hit a single to right, scoring Straw and Rosario. Ramirez scored on a double play.

Andrew Benintendi drew the Royals within one run with a two-out, two-run home run in the bottom of the first, driving in Salvador Perez.

Perez doubled leading off the fourth. Benintendi sent him to third with a deep fly ball, and Carlos Santana drove him in with a sacrifice fly.

Perez then put the Royals ahead with one out in the sixth with his 429-foot blast.

The Indians tied it in the eighth when pinch-hitter Oscar Mercado singled with one out. Yu Chang, who had lined out to the outfield twice earlier in the game, doubled home Mercado.

The Royals reinstated OF Michael A. Taylor from the bereavement list on Tuesday. To make room, OF Edward Olivares was optioned to Triple-A Omaha.