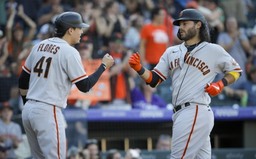 DENVER (AP) The San Francisco Giants moved closer to a division title with a clutch win. Now they hope their home run leader can be help them capture the crown.

Brandon Crawford homered to cap a four-run ninth inning and the Giants held their lead in the NL West, beating the Colorado Rockies 6-2 on Sunday but lost first baseman Brandon Belt to a hand injury.

The Giants, who have won 15 of 19, have a two-game lead over the Los Angeles Dodgers, who beat Arizona 3-0 on Sunday. San Francisco now heads home to Oracle Park with a chance to clinch their first division title since 2012.

Belt left the game in the seventh inning after getting hit on the left hand with a pitch while squaring to bunt. Giants manager Gabe Kapler said a scan was inconclusive and Belt will get X-rays back in San Francisco.

"It's not time to reflect on us losing Brandon Belt," Kapler said. "We're just not there yet."

Crawford was optimistic Belt wouldn't be out long.

"It's scary when it's a fastball or a hard pitch either close to his hand or on his hands," he said. "There are so many little bones that can break. From talking to him, he seems like he should be all right, not miss too much time."

San Francisco had to work for its sixth straight win at Coors Field, and its 102nd victory overall - its most since winning 103 in 1993.

It was 2-all when reliever Daniel Bard (7-8) walked Steven Duggar and Wilmer Flores, and pinch-hitter Tommy La Stella lined an RBI single with one out.

Rockies manager Bud Black turned to Tyler Kinley to keep it close instead of allowing Bard to face Crawford.

"Bardo's been out there a little bit the last five days and you could tell he wasn't hitting his spots," he said. "The walk to Duggar and the base hit to La Stella, I thought Kinley would give us a better chance against Crawford."

Crawford spoiled the strategy with his 23rd of the season.

"Craw's been good in those moments all season long. No surprise," Kapler said. "He got a pitch he could drive."

Camilo Doval (5-1) pitched the eighth inning for the win.

San Francisco starter Kevin Gausman struck out 11 in six innings but was left with a no-decision when Colorado tied it in the seventh.

Gausman retired 13 straight after Garrett Hampson's single to lead off the first inning. C.J. Cron ended the streak with his 28th homer with one out in the fifth that cut San Francisco's lead to 2-1.

Gausman, who entered Sunday with a 5.33 ERA in five September starts, said he made a mechanical adjustment that helped him.

"For me today was a big step forward. I could just tell from the get-go that I was my normal self and back to when I was going good," he said. "That confidence just came back and I felt like I could throw any pitch when I needed to."

Giants reliever Zack Littell committed a balk in the seventh to put runners on second and third. Cron, who led off with a single, scored on a grounder when he beat the throw home from second baseman Donovan Solano that tied it at 2.

San Francisco scored its first run on a groundout in the second inning and added another in the fifth. Belt reached on a bloop double with two outs and scored on Kris Bryant's single.

Giants: INF Darin Ruf (right oblique strain) was planning on taking swings Sunday and is hopeful to come off the 10-day injured list on Thursday, the first day he is eligible.

Belt was hit when he squared to bunt against reliever Lucas Gilbreath. He stayed in the game to run but Flores took over at first in the bottom of the inning.

Belt's absence was magnified when Flores' error in the seventh contributed to the tying run.

Giants: Kapler announced after the game that Logan Web (10-3, 3.04) will start Tuesday against Arizona to begin six home games against the Diamondbacks and San Diego to close the regular season.

Rockies: RHP German Marquez (12-10, 4.32) will make his final home start of the season when Colorado opens a three-game series against the Washington Nationals on Monday.