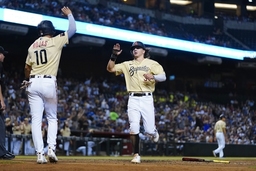 PHOENIX (AP) Ketel Marte and Carson Kelly homered early off Clayton Kershaw, and the last-place Arizona Diamondbacks delayed the Los Angeles Dodgers from reaching 100 wins by beating them 7-2 on Saturday.

The Dodgers (99-56) fell two games behind first-place San Francisco in the NL West with seven to play when the Giants beat Colorado. The second-place team will host the NL wild-card game on Oct. 6, likely against the St. Louis Cardinals, who have won a franchise-record 15 consecutive games.

Zac Gallen (3-10) pitched one-run ball over six innings for Arizona. Gallen, who spent much of the season on the injured list and hadn't won since Aug. 26 against Philadelphia, established the tone early, striking out six Dodgers in the first two innings.

"It's the first time in how long that it's clicked? Wish it would have clicked sooner, but I just kept plugging away," Gallen said. "For it to click against a lineup like that ... going into the offseason I knocked down a pretty big wall. Gives me something to build on."

Gallen gave up only three hits - Corey Seager's infield single in the first, Justin Turner's single in the fourth and Trea Turner's home run, which came with one out in the sixth and was the first of two homers on the night for the Dodgers second baseman.

"Gallen was just better than we were," Dodgers manager Dave Roberts said. "We couldn't get anything going outside of Trea. He came out and stuck it to us. We got behind early and couldn't recover. You've got to give credit to that guy.

"You're looking at seven games left in the season and trailing by two, yeah it hurts. Things can still change."

Kershaw (10-8) lasted just 4 1/3 innings, giving up six hits and four runs - three earned. He walked none and struck out three. His defense didn't do him any favors; Justin Turner's error in the fourth led to a run.

In three starts since returning from two months on the injured list with left forearm inflammation, Kershaw has not lasted more than five innings.

Marte, who finished with three of the Diamondbacks' nine hits, homered to left field on Kershaw's first pitch. Kelly led off the second inning with a drive into the Arizona bullpen in left. Each batter got his 13th home run of the season for the Diamondbacks, tied for the major league lead with 105 losses and just 2-8 in their previous 10 games.

"Threw a couple bad pitches early," Kershaw said. "You miss your spots sometimes. Hopefully they stay in the ballpark, but it didn't happen tonight. Put us in a hole early. Obviously overall it wasn't great."

In the fifth, Gallen led off with a chopper to second that Trea Turner couldn't handle. Marte singled and Henry Ramos grounded to third near the bag. Justin Turner fielded it and stepped on the bag, but threw to second too late to get Marte, and Ramos beat the relay to first. Daulton Varsho followed with a sharp single to center, scoring Marte and knocking out Kershaw.

Arizona added a run in the seventh against David Price. Jake McCarthy walked leading off, moved up on a wild pitch and scored on pinch-hitter Kole Calhoun's single. Another pinch-hitter, David Peralta, drove in two runs with a single off Evan Phillips in the eighth.

Turner's second homer, off Caleb Smith in the ninth, was his 24th.

The Dodgers' Mookie Betts was 0 for 3 with a walk, ending his hitting streak at 15 games. He did rob Marte of a fourth hit with a running catch near the wall in the eighth.

Dodgers: LF Chris Taylor (neck) made his first start in a week. He came off the bench in the previous two games. The Dodgers have juggled injuries to Taylor and fellow outfielders AJ Pollock (right hamstring) and Cody Bellinger (ribs) while using infielder Gavin Lux in the outfield rotation. Lux started in center field Saturday night.

Roberts said Bellinger, currently on the injured list, will return before the regular season ends on Oct. 3. "It's getting better each day. We just don't know the exact time," the manager explained.

Diamondbacks: SS Nick Ahmed (throwing arm) has been sidelined for a week, and manager Torey Lovullo wants to wait until the Gold Glove winner is completely ready. Ildemaro Vargas filled in at shortstop Saturday.

"I don't want to put him in a situation where things will really back up on him. It's lingered a little longer than expected," Lovullo said.

Lovullo also said 1B Seth Beer (dislocated left shoulder) had surgery to repair what the manager called "instability" and is recuperating.

The combination of the Dodgers in town and Hispanic Heritage Night drew a crowd of 28,206 to Chase Field.