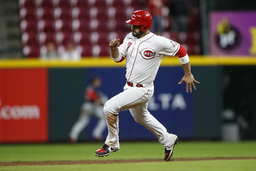 CINCINNATI (AP) National League batting leader Juan Soto homered in consecutive innings, and the Washington Nationals pushed the Cincinnati Reds further from playoff contention with a 3-2 win Thursday night in the opener of a four-game series.

Seeking his second straight NL batting title, Soto raised his average to .325 with a three-hit night and is four points ahead of the Los Angeles' Dodgers Trea Turner. Soto's former Nationals teammate had a three-hit game at Colorado.

Soto led off the sixth against Luis Castillo with an opposite-field drive to left that bounced off the top of the wall and into the stands. He homered to the opposite field again in the seventh for his 29th homer and third in two nights.

"I always enjoy matchups with hitters like Soto," Castillo said through an interpreter. "It is part of the game. I always enjoy it."

Soto, who turns 23 on Oct. 25, has 11 multihomer games, one behind Eddie Mathews for the most before a player's 23rd birthday.

"He doesn't give at-bats away," manager Dave Martinez said. "He works counts and stays on the ball. He comes ready to play. I definitely think he should be considered for MVP. The numbers he's putting up are incredible."

"He's showing his teammates that he comes every day to win baseball games. He wants to do that. It's fun to watch him."

"I worked on a couple of things in my bullpen and when I was throwing every day, like throwing over my leg more and throwing quality strikes," Corbin said. "It was just a good step. Hopefully, I can finish the season with another good one and take it into the offseason."

Mason Thompson finished the seventh, former Red-Tanner Rainey pitched the eighth and Kyle Finnegan gave up two runs in the ninth before getting his 11th save in 14 chances.

Cincinnati dropped 5 1/2 games back of St. Louis for the second NL wild card with nine games left. The Reds have lost four of six on a season-long 10-game homestand.

Castillo (8-16) broke a tie with Corbin for the most losses in the majors, allowing two runs, six hits and three walks in six innings. He is 2-6 in his last nine starts, which includes four losses in which the Reds scored one run in each game.

Cincinnati struck out 11 times, was 1 for 8 with runners in scoring position and stranded nine runners. The Reds had the bases loaded with one out in the third, but Nick Castellanos and Joey Votto struck out, then had runners at the corners in the fourth before Castillo grounded out.

'"'Corbin made pitches when he had to," Reds manager David Bell sad. "His slider was his key pitch especially to our right handed hitters. Those guys, Castellanos and Votto, have been doing it all season. They're not going to come through every time. It's such a tough game. I am sure they can't wait to be in that same situation tomorrow."

Pinch-hitter Max Schrock had an RBI triple into the right-field corner in the ninth and scored on Tucker Barnhart's grounder.

Soto's first inning walk was his 131st of the season, a Washington single-season franchise record. He went into the game tied with Bryan Harper, who drew 130 walks in 2018.

Washington third baseman Carter Kieboom leaned into the protective netting along the third base line to catch Joey Votto's popup in the third inning, but third base umpire Angel Hernandez ruled that the ball grazed the netting just before Kieboom caught it, making it no play.

Reds: LHP Wade Miley was pushed back from his scheduled start on Friday after reporting tightness around his neck in his last start.