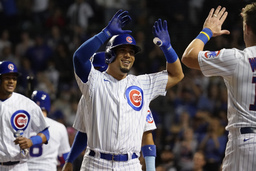 Rafael Ortega and Ian Happ homered for Chicago, and Alcantara logged the first three-hit game of his career. Codi Heuer (6-2) got three outs for the win.

Alcantara began the 11th on second base and advanced on Ortega's sacrifice bunt against Sam Howard (2-3). Happ then sent a high fly to second, where Difo committed the game-ending error.

"Instead of getting behind it, he drifted to it," Pirates manager Derek Shelton said. "You cannot drift to any balls in this ballpark the way the wind plays. It's a frustrating loss because we battled our butts off the entire game, and he's just got to get behind that baseball."

It's the first three-game win streak for the Cubs since a five-game run from June 8-13.

"Obviously frustrated that I missed the pitch," Happ said. "And then ecstatic that we won the game. Just a crazy way to end it."

The last-place Pirates wasted a stellar start by Mitch Keller, who struck out eight in six scoreless innings. Colin Moran hit a three-run homer in the first, and Bryan Reynolds finished with two hits.

The Cubs rallied after Keller departed. Ortega tied it at 3 with a three-run shot against Chad Kuhl in the seventh. Frank Schwindel then singled and Happ connected for his 18th homer, sending a drive deep to right-center.

The Pirates tied it in the ninth against Rowan Wick. With one out and the bases loaded, Michael Perez drove in two runs with a pinch-hit single to right. But Cole Tucker then bounced into a double play.

"They did what I did not do," Thompson said. "They threw first-pitch strikes. They threw a lot of strikes early and often. I can't say enough about how well they did tonight."

Pittsburgh has lost five of its last six games after winning three of four.

Schwindel was announced as the NL Rookie of the Month for August. The 29-year-old batted .344 last month with six homers and 18 RBIs.

Schwindel was claimed off waivers after he was designated for assignment by Oakland on July 16.

Cubs: INF Nico Hoerner (strained oblique) took ground balls and hit in the batting cage. ... INF David Bote (sprained ankle) shed his walking boot, but there is still no timetable for his return. ... C Willson Contreras (sprained knee) will make another rehab start with Triple-A Iowa on Friday before his next step is determined.