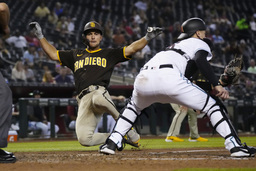 PHOENIX (AP) Blake Snell blew through seven no-hit innings, making things tough on the Arizona batters - and his own manager.

San Diego skipper Jayce Tingler pulled Snell after 107 pitches with a no-hitter in progress, and the Diamondbacks broke up the bid in the eighth Tuesday night in the Padres' 3-0 victory.

"It's not what you want to do," Tingler said. "But I felt it was the right thing to do."

The Padres were trying for the ninth no-hitter in the big leagues this season, which would have broken a record set in 1884, the first year overhand pitching was allowed.

Snell was disappointed he didn't finish the game, but didn't blame his manager for cutting his solo no-hit bid short, especially with the Padres in the middle of an intense playoff race.

"There's a lot of things I need to do better to allow myself the opportunity to get to the ninth and be able to finish it," Snell said. "107 pitches through seven ... it's going to be pretty tough to say, 'let's go' unless we're at the end of the season and it's all or nothing."

Mark Melancon gave up two singles in the ninth before striking out Pavin Smith for his 36th save.

Manny Machado hit a two-run homer for the Padres in another desperately needed win. San Diego has won three of its past four games and pulled into a tie with the Cincinnati Reds for the final NL playoff wild-card spot.

"This is the type of momentum we need to build going into the last four or five weeks," Tingler said. "We're right back in this thing."

Snell (7-5) struck out 10 and walked two but the pitches piled up. The performance came just six days after he threw a season-high 122 pitches against the Los Angeles Dodgers.

Tingler's decision was certainly understandable, but the sizable Padres crowd at Arizona's Chase Field booed Tingler for the decision after Johnson came into the game and booed even more after Peralta's single.

It's the second time in less than a year that Snell has been pulled from the mound during a stellar outing. He was rolling in Game 6 of the World Series last season for the Tampa Bay Rays before Kevin Cash controversially made the decision to take him out of the game.

The Dodgers ended up rallying to win the game and the championship.

Snell cruised through the early innings on Tuesday, blowing past an overmatched D-backs lineup with 97 mph fastballs and pinpoint breaking balls. He struck out seven of eight batters in a particularly dominant stretch that lasted from the second to the fourth innings.

Snell's been superb over his last six starts, giving up just seven earned runs over 36 2/3 innings.

"It was an aggressive fastball at the bottom and top of the zone," Arizona manager Torey Lovullo said. "It was a curve over the slider until the sixth and then he mixed in the slider. He had a three-pitch mix going and had a good day."

Machado hit his two-out homer on a hanging breaking ball in the fifth to give the Padres a 2-0 lead. It was his 23rd homer of the season and gave him 86 RBIs.

Arizona rookie Tyler Gilbert threw the majors' most recent no-hitter on Aug. 14. That no-hitter was also at Chase Field against the Padres.

The Chicago Cubs threw a combined effort June 24. The other no-hitters this year were thrown by San Diego's Joe Musgrove (April 9), Carlos Rodon of the Chicago White Sox (April 14), Baltimore's John Means (May 5), Cincinnati's Wade Miley (May 7), Detroit's Spencer Turnbull (May 18) and the New York Yankees' Corey Kluber (May 19).

Musgrove's no-hitter was the first in Padres franchise history, which stretches back to 1969.

Diamondbacks RHP Luke Weaver will start against the Padres on Wednesday after a lengthy stay on the injured list.

Weaver hasn't pitched in more than three months because of a strained right shoulder. The 28-year-old has a 2-3 record and a 4.50 ERA.

His absence is one of many reasons the D-backs' season has fallen well short of expectations. All five of the team's expected starting pitchers at the beginning of the season have missed time this season. Merrill Kelly has pitched the most with 142 1/3 innings but is currently on the COVID-19 injured list.

The Diamondbacks will send Weaver to the mound to face San Diego RHP Yu Darvish (7-8, 3.80) in the finale of a three-game series on Wednesday.