Rosario 5 hits, HRs inside and out of park, Indians beat KC 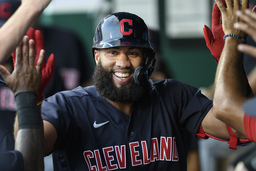 KANSAS CITY, Mo. (AP) Amed Rosario became the first player on record to go 5 for 5 with five RBIs, an inside-the-park homer and a drive over the fence, and the Cleveland Indians beat the Kansas City Royals 7-2 Tuesday night.

Rosario had the first five RBI game of his career and matched a career high in hits. He's the first player since at least 1920, when RBIs became an official stat, to go 5 for 5 with five RBIs and both types of homer in the same game, according to STATS.

"I always want more and plan to get more," Rosario said through an interpreter.

"It was fastball command all night," Plesac said. "That opened everything up for the off-speed."

Plesac even shut down Salvador Perez, who had homered in his last five games. Perez was 0 for 3 in the game and dropped to 0 for 5 with three strikeouts in his career against Plesac.

"I think it comes down to game plan," he said. "I know they're going to be sitting offspeed, so I just keep them honest with the heater."

"He did a nice job of keeping us in the game," Kansas City manager Mike Matheny said. "He used the slider and had it going early. He kept them off-balance and gave us an opportunity.

"We couldn't put anything together (against Plesac). We had four baserunners through eight innings and two of those ended up in double plays. When we did get a runner he got out of it really quickly," he said.

Rosario legged out his inside-the-parker in the first inning when his slicing drive fell just beyond the reach of right fielder Edward Olivares.

Olivares stumbled to the ground as the ball caromed away, clearing the way for Rosario to get the team's first inside-the-park homer since Jason Kipnis on Aug. 24, 2018, also at Kansas City.

"When I connected and the ball hit the wall I was looking for a triple," Rosario said. "When I crossed second and saw (third base coach Kyle Hudson) waving his arms, I realized it was going to be a homer and I kept going."

In the fifth, Rosario greeted reliever Joel Payamps with a two-out, two-run single up the middle.

Rosario connected for a two-run homer in the seventh, a 420-foot drive to straightaway center.

The Indians got their final runs in the eighth on Bobby Bradley's two-run home run.

The Royals tallied two runs in the ninth on a single by Carlos Santana and a double by Andrew Benintendi.

Indians: RHP Aaron Civale is scheduled for his third rehab start Wednesday for Double-A Akron. He has yet to allow an earned run in 6 1/3 innings in his first two starts. ... C Roberto Perez began a rehab assignment in Akron. He has been on the injured list since Aug. 4 with right shoulder inflammation. ... Selected the contract of C Gianpaul Gonzalez from High-A Lake County and placed C Wilson Ramos on the 10-day injured list. Gonzalez has only played 166 minor league games over seven seasons but will make his major league debut in his first appearance with the Indians.

Royals: Recalled Junis from a rehab stint with Triple-A Omaha. To make room, they optioned RHP Scott Blewett to Omaha after Sunday's game.

Cleveland LHP Logan Allen (1-5, 7.53 ERA) will get the start in the second game of a three-game series. Allen will be looking to snap a personal four-game losing streak, though he has no-decisions in his last two starts.

RHP Jackson Kowar (9-2, 18.00 ERA) will make his return to Kansas City after being sent down to Triple-A Omaha following his third start in mid-June.