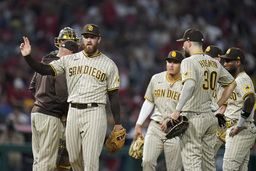 ANAHEIM, Calif. (AP) Jared Walsh homered and drove in three runs, Justin Upton got his 1,000th RBI and the Los Angeles Angels snapped their three-game skid with a 10-2 victory over the San Diego Padres on Saturday night.

Shohei Ohtani stole second to became the first player in team history with 40 homers and 20 steals in a season for the Angels, who won for only the second time in eight games.

Ohtani went 0 for 4 for the second straight night, but the two-way superstar walked and promptly stole second in the fifth to join the 40/20 club. No AL player had reached those marks since Curtis Granderson did it for the Yankees in 2011.

"Shohei breaks another record every day," Walsh said. "According to our scoreboard, no one has done anything that he's done since 1885 or whatever. So every night with Sho, it's something different."

The Angels were briefly worried Ohtani had injured his right hand after a pitch from Ryan Weathers (4-7) hit him on the hand in the first inning. Manager Joe Maddon said X-rays were negative, and Ohtani stayed in the game.

"Every day for the rest of the season, he's probably going to do something that really stands out," Maddon said.

Jack Mayfield also had a two-run homer for the Halos, who have scored at least 10 runs in each of their last three victories - and just nine combined runs in their last six losses.

Eric Hosmer and Austin Nola had RBI singles in the fourth for the Padres, who blew their chance to pull within one game of Cincinnati for the NL's second wild-card spot after the Reds lost at Miami. San Diego (69-62) has lost five of six and 13 of 16.

"(It was) the first night we went to the bullpen and we couldn't get any zeros on the board," Padres manager Jayce Tingler said. "With what (Joe) Musgrove did yesterday, we were thinking we could get to our bullpen and they could shut them down. They kept scoring and we couldn't get it stopped, so it felt like they were adding two an inning for a while there. It kind of got contagious."

The Angels went ahead in the second when Walsh connected for only his second homer since appearing in his first All-Star Game last month.

"Second half has been a grind, but I think everybody knows at some point during the season, you're going to hit a rough patch," Walsh said after his third multi-RBI game since the break. "I try not to live and die with the results too much. Just understand if I'm using the whole field and swinging at strikes, good things are going to happen."

Upton became the eighth active player to record 1,000 RBIs with a sacrifice fly in the fifth. The veteran left fielder is the only active player with at least 300 homers, 1,000 RBIs and 150 stolen bases.

Angels starter Jose Suarez pitched three innings of one-hit ball before four straight Padres reached base in the fourth. San Diego's two-run rally would have been even bigger, but Angels right fielder Jo Adell made a fantastic throw to get Wil Myers at third.

Weathers (4-7) struggled in his return to the Padres' rotation, yielding four hits and three runs over three innings. Weathers has a 9.00 ERA in his past nine starts since July 1, and Tingler all but confirmed the left-hander won't get another opportunity soon.

"As we start to get some guys healthy and back to pitch, there's some things we've got to discuss," Tingler said.

Andrew Wantz (1-0) got his first major league victory for the Angels with 1 1/3 innings of hitless relief and three strikeouts. The 25-year-old rookie made his major league debut July 4.

Trent Grisham was ejected in the eighth inning by home plate umpire Vic Carapazza after disputing a called third strike.

Padres: RHP Chris Paddack threw a bullpen session and remains on track to possibly return to the rotation Monday in Arizona. He has been out since straining his left oblique muscle a month ago.

Angels: Ohtani is due to pitch Tuesday, and the Angels will see how he feels when they get back to work Monday.

Angels: After the first scheduled Sunday off-day in franchise history, they host the streaking Yankees on Monday. Los Angeles hasn't named the starting pitcher who will fill the latest hole in their injury-ravaged rotation.