Diamondbacks a perfect 4-0 against Phillies after 8-7 win 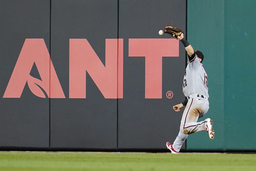 PHILADELPHIA (AP) Carson Kelly hit a two run-homer and drove in three runs, Nick Ahmed added a two-run blast, Christian Walker had a career-high four hits and Zac Gallen pitched five strong innings in his first start in his hometown, leading the Arizona Diamondbacks to an 8-7 win over the slumping Philadelphia Phillies on Thursday night.

Walker, who grew up in the Philadelphia suburbs, and the rest of the Diamondbacks feasted before the game on meatballs supplied by Walker's mother, Julie.

"They're the magic meatballs," said Walker, who had four singles and a walk and scored a run. "That's my first 4-for-4 game of my career. I know (manager) Torey Lovullo ate like 30 of them, but there better be some left over tomorrow because I need some more hits."

Gallen (2-7), who grew up in nearby Pennsauken, New Jersey, didn't get any meatballs before the game, but he was energized by the nearly 100 friends and relatives he had in attendance for his first start in Philadelphia.

"It was a lot of fun," Gallen said. "It didn't matter if we won or lost, just to have so much heartfelt support there for me was great. It worked out because we won."

Gallen needed 103 pitches to get through five innings. He allowed just three hits and no earned runs while striking out six.

It's been a long year for Arizona (44-85), but the Diamondbacks have been perfect against the Phillies this season, winning all four contests, so far. Since 2017, Arizona is 18-5 against Philadelphia, the best record against the Phillies of any team in baseball in that span.

Jean Segura hit a two-run home run to supply the brunt of offense for the Phillies (62-63), who have lost seven of nine to fall 5 1/2 games behind the idle Atlanta Braves in the NL East. Philadelphia is 4-11 since winning eight in a row and moving into first place earlier this month.

The Phillies tried to mount a comeback by taking advantage of two Arizona errors in the ninth inning. They added unearned runs on a fielder's choice by Freddy Galvis, two-run double by Bryce Harper, and a two-run single by Didi Gregorius. But Philadelphia couldn't finish it off as Noe Ramirez struck out Brad Miller with the tying run on base to earn his first save since 2018 when he was with the Los Angeles Angels.

"We've found different ways to lose games," Phillies manager Joe Girardi said. "As you see, there's no quit in this team, and we're going to fight, fight and fight. Obviously, we need to start winning games, it's no secret. It's frustrating after we played well there and put ourselves in a good position, and now we've dug ourselves a hole."

The Diamondbacks jumped all over Phillies starter Matt Moore (2-4), tagging him for four runs and seven hits in just four innings.

Moore was pressed into emergency starting duty after scheduled starter Zach Eflin was scratched just a couple hours before the game with inflammation in his left knee.

Ahmed's homer was a big blow in the fourth inning, as he crushed a 1-2 fastball from Moore to the deepest part of the ballpark in left centerfield for his fourth homer of the season to make it 4-0.

Kelly's homer, his 10th of the season, seemed to put the game out of reach in the eighth inning, but turned out to be the game-winning RBI. Kelly also had an RBI single in the sixth inning to restore Arizona's four-run lead after Segura's homer an inning earlier.

Might Segura's home run be an indicator of breaking out of a prolonged slump? On Aug. 11, he was in the top five of the NL in batting, hitting a robust .316. However, in 13 games since, Segura had gone ice cold. Prior to his homer, he was 4 for 49 (.082) and had seen his average plummet to .287 for the season. However, Segura followed up the big fly with a single in the seventh inning for his first multi-hit game in more than two weeks.

Diamondbacks: RHP Merrill Kelly, who tested positive for COVID-19 on Aug. 14, was cleared to come out of isolation Wednesday. He is expected to throw a bullpen session Friday, but the D-backs expect his return to be a slow process. Meanwhile, OF Kole Calhoun, who has been sidelined with a hamstring strain since Aug. 11, took live at-bats before the game Thursday and continued his outdoor running program, which included taking flyballs. In addition, SS Jordan Lawler, Arizona's first round pick in last month's draft, suffered a left-shoulder injury that will require season-ending surgery and a seven-month recovery period. Lawler, the No. 6 overall pick, played just two games in the Arizona complex league before sustaining the injury. Finally, OF Ketel Marte left the game in the sixth inning with right hip discomfort.

Phillies: It was a busy day for the Phillies as far as injuries. 1B Rhys Hoskins, who leads the team in both home runs (27) and RBI (71) was placed on the 10-day IL and will miss the remainder of the season as he requires surgery for an abdominal tear. In addition, RHP Zach Eflin, who came off the 10-day IL Thursday and was slated to start the game, was a late scratch when his injured knee flared up again. This occurred mere hours after the Phillies designated starting pitcher Chase Anderson for assignment, meaning the starting pitching depth got that much thinner. "It's been quite the day," manager Joe Girardi said before the game.

Diamondbacks: RHP Taylor Widener (2-1, 4.34) will start for Arizona in the second game of the four-game series with Philadelphia.

Phillies: Aaron Nola (7-7, 4.33) returns to the mound looking to rebound from his start last Friday, one Philadelphia lost in extra innings despite Nola taking a perfect game into the seventh inning against San Diego.