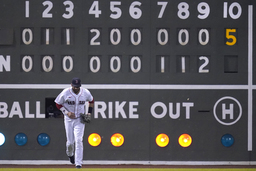 BOSTON (AP) Twins manager Rocco Baldelli, who grew up in Rhode Island rooting for the Red Sox and played for them near the end of his career, knows better than to mess with the legend of Ted Williams in Boston.

And yet, he said: "I don't know how a human being can hit a ball much farther than Miguel Sano did."

After Kyle Schwarber hit a two-run homer in the ninth to complete Boston's comeback from a four-run deficit, Josh Donaldson and Jake Cave homered in the 10th to give the Twins a 9-6 victory.

But it was Sano's drive that left both teams agape.

The third-inning solo homer was the longest at Fenway since Statcast began measuring them in 2015. It left the ballpark high above the 379-foot marker at the center field edge of the Green Monster, clearing the 37-foot wall, four rows of counter-height seats, an aisle behind them and a 6-foot fence behind that.

"Miguel's a big, strong man. When he gets into them, they go far," Donaldson said. "That should count for two, I think."

Donaldson and Jorge Polanco homered for the second straight game to snap Minnesota's four-game losing streak. The Twins led 4-0 before Boston scored one in the seventh, one in the eighth, and then tied it on Schwarber's two-run homer off Alex Colome (4-4) in the ninth to send the game into extra innings.

That's when Hansel Robles, who was in line to take over as closer after Matt Barnes blew big leads in back-to-back games this week, gave up Donaldson's game-winner. After a hit and a hit batsman, Cave sent the first pitch he saw to the same spot over the Boston bullpen to make it 9-4.

Colome earned the win despite blowing a 4-2 lead in the ninth. Kike Hernandez homered in the bottom of the 10th before Ralph Garza Jr. retired Schwarber on a popup to third base.

Schwarber had three hits for Boston, which holds a 1 1/2-game lead over idle Oakland in the AL wild-card race. Robles (3-5) was charged with four earned runs on three hits and a walk. He struck out two.

Williams' homer off Fred Hutchinson on June 9, 1946, landed 37 rows up in the right-field bleachers and hit Section 42, Seat 21 occupant Joe Boucher on the head, breaking his straw hat. It was measured at 502 feet; the location is now marked with a lone red seat.

In 2001, using a system that is less accurate than the one Statcast now uses, a Manny Ramirez homer was measured at 501 feet - somewhat suspiciously preserving the Williams legend.

Sano's homer left the ballpark to the left of the flagpole behind the hitter's eye in center, depriving him of another distinction: Only a half-dozen players have ever hit balls out of Fenway and to the right of the flagpole, with the last one by Jim Rice in 1975.

The Red Sox cost themselves a run in the third when, with two outs, Christian Vazquez held up at second waiting to see if Schwarber's line drive landed safely in center field. It fell in for a single, but since Vazquez wasn't running on contact he failed to score and was stranded on third when Bogaerts flied out to end the inning.

The next inning, after Minnesota scored two in the top half to take a 4-0 lead, Alex Verdugo hit a high fly to left that just caught the top of the Green Monster. Not only did Verdugo spend too much time admiring it to take what should have been an easy double, he made the turn too wide at first and was thrown out there.

Verdugo did run hard on Hunter Renfroe's wall double in the eighth, going from first to third and then scoring to make it 4-2 when the relay was mishandled.

Twins: OF Byron Buxton had a pair of hits during a Triple-A rehab start for St. Paul as he tries to work his way back from a broken bone in his finger that was hit by a pitch.

Red Sox: Pinch-hitter Kevin Plawecki was hit in the hand by a pitch in the eighth inning. He left for a pinch runner, which may not have been injury-related.

Minnesota sends RHP John Gant (4-7) to the mound in the series finale. Boston LHP Chris Sale has won both starts since returning from Tommy John surgery that sidelined him for two years.