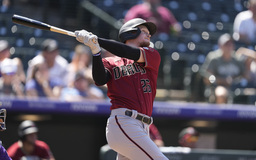 DENVER (AP) Daulton Varsho hit a three-run homer and finished a single short of hitting for the cycle to lead the Arizona Diamondbacks over the Colorado Rockies 8-4 on Sunday for a rare win at Coors Field.

Taylor Widener (2-1) tossed five innings of one-hit ball to help Arizona end a seven-game losing streak in Denver. Widener allowed a run, worked around five walks and struck out five to pick up his first win since April 4.

Widener, who is still recovering from a cold that caused him to miss a start earlier this month, also got his first major league hit.

"It probably would have felt better if I was pitching a little bit better," he said of his single. "I'm happy to finally get it. It took long enough."

Widener said he had trouble finding a rhythm in the windup, which contributed to his five walks, and he went to the stretch.

"You can't walk batters in this ballpark, you can't put on extra baserunners," Arizona manager Torey Lovullo said. "We dodged a couple of bullets."

Colorado had won five straight and nine in a row at home.

Jon Gray (7-10) has lost four straight starts, all in August, and saw his ERA rise to 6.75 for the month. He allowed five runs on six hits in 5 1/3 innings, struck out eight, walked three and threw a season-high 108 pitches.

Gray kept Colorado close before he couldn't find the strike zone in the sixth inning, and the Diamondbacks took advantage without getting a hit.

Gray walked Josh VanMeter and Drew Ellis with one out before being relieved by Lucas Gilbreath, who walked two more to drive in a run. Robert Stephenson brought home another run with the fifth base on balls of the inning to make it 5-1.

"I think the walk to Ellis was a backbreaker for sure," Rockies manager Bud Black said.

Christian Walker hit a solo homer in the seventh, his sixth of the season. Varsho tripled in the ninth to drive in another run.

The Rockies led 1-0 on Ryan McMahon's RBI double in the first but Arizona strung together four straight hits in the second to take the lead. McMahon also had a run-scoring single in the two-run eighth.

VanMeter singled, Ellis doubled and Varsho hit his second home run of the series and eighth of the year to put Arizona ahead 3-1 in the second.

Varsho homered for the second straight game and it was the 11th of his short career. It is one more than his father, Gary, had in 570 major league games. The Diamondbacks have won seven of their past 10 games.

"It's more fun to win," Varsho said. "We had a good homestand, the first two games (at Coors Field) were rough, getting walked off last night, but came out strong today and Widener did a good job of trying to slow this team down."

Rockies: OF Ramiel Tapia (right big toe strain) did some running on the infield before the game. He ran in the outfield on Friday and his next step is to sprint out of the batters box.

Arizona reliever Caleb Smith pitched two-plus innings while he awaits a ruling from the league office about a substance found on his glove on Wednesday. Smith was ejected from that game against Philadelphia after the umpires determined there was a foreign substance on the glove.

It was sent to the league office and he could face a suspension if testing on the glove verifies the umpires' ruling.

"We're just waiting for a ruling," Lovullo said. "You talk about mental toughness when you have to block out some of that black noise. This game's tough enough and when you have something like that hanging over your head, gave us two-plus really good innings, and important innings."

Diamondbacks: Lovullo announced after the game RHP Humberto Mejia (0-0, 0.00) will be called up to start at Pittsburgh on Monday night.

Rockies: RHP Antonio Senzatela (2-9, 4.58) is seeking his first win since June 2 when Colorado opens a three-game series at the Chicago Cubs on Monday night.