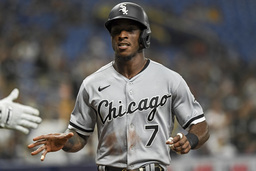 Anderson had a game-tying homer in the ninth and a tiebreaking RBI single in the 11th as the White Sox beat the Tampa Bay Rays 7-5 Friday night in a matchup of AL division leaders.

"The heart and soul of our team," Chicago starting pitcher Lucas Giolito said,

After Tampa Bay's Andrew Kittredge (8-2) worked a perfect 10th, Anderson opened the 11th with a hit and scored on a fielder's choice grounder by Jose Abreu to make it 7-5.

"We got burned by a good player," Tampa Bay manager Kevin Cash said. "It was a tense game, we anticipated that with two clubs that are sitting 70-plus wins right now."

Liam Hendriks (8-3) got out of a jam in the 10th with a man on third and one out. Ryan Tepera worked the 11th and earned his second save.

After blowing a two-run lead in the eighth inning, Anderson pulled the White Sox even at 5-all with a leadoff homer in the ninth off JT Chargois.

Anderson, who went 3 for 6, had a walk-off homer to beat the New York Yankees in the "Field of Dreams" game in Dyersville, Iowa, on Aug. 12.

"There's no better better shortstop in the whole league when you talk about his complete game," White Sox manager Tony La Russa said. "Watch this game and it's all you will need to know about this greatness,"

Chicago reliever Craig Kimbrel began the eighth by throwing seven straight balls, including a walk to Manuel Margot. After Kimbrel struck out Mike Zunino for the second out, Aaron Bummer entered and walked pinch-hitter Randy Arozarena, gave up Wander Franco's RBI infield single and Austin Meadows' two-run base hit that put the East-leading Rays ahead 5-4.

Meadows has driven in 85 runs.

"This one sting a little bit because we had such a great comeback," Kittredge said. "So yeah, it hurts."

The Rays tops the majors with 242 runs in the seventh inning or later but are 5-11 in extra innings.

Giolito gave up two runs and three hits with eight strikeouts in seven innings, and Yoan Moncada hit a two-run homer for the Central-leading White Sox. Chicago was 1 for 15 with runners in scoring position through 10 innings.

Ji-Man Choi homered for the Rays, who were coming off a dominating four-game sweep over Baltimore in which they outscored the struggling Orioles 34-8.

After Anderson scored from third on a nifty head-first slide on Abreu's fielder's choice grounder, Moncada made it 4-1 on his two-run shot off Michael Wacha.

Seven of the first 12 White Sox batters had hits off Wacha, but Chicago scored just once through three innings by going 1 for 8 with runners in scoring position over the stretch.

Wacha allowed four runs, nine hits and struck out nine in five innings. The right-hander had given up 18 runs and 30 hits over 14 innings in his previous three starts.

Choi tied it at 1 on his two-out homer in the second inning. Kevin Kiermaier had a sacrifice fly in the fifth.

Franco was OK after Andrew Vaughn's grounder deflected off his glove and hit him on the right side of the face. He was charged with an error, one of three for a normally strong Rays defensive team that also saw Zunino with three passed balls.

With a sizable influx of the White Sox fans, the announced attendance was 13,178. The Rays drew 22,754 (average of 5,689) during the a four-game series with Baltimore.

MLB Network has added the White Sox home game against the crosstown rival Cubs next Friday, with the all-female broadcasting crew of Melanie Newman, Elise Menaker and Alanna Rizzo.

White Sox: La Russa said INF-OF Leury Garcia (concussion IL) is making progress, but is not ready yet to return.

Rays: RHP Chris Archer (right forearm tightness), out since April 11, is scheduled to start Sunday's game with the White Sox.