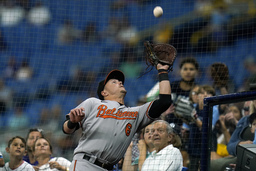 "We're just going through a really rough time in this rebuild right now," Orioles manager Brandon Hyde said. "We're playing against teams that are postseason (contenders) and we're a long ways away. They're playing to win it and we're trying to just do the best we can and stay positive with it."

Baltimore has been outscored 131-40 during the current slide.

"We're just not in many games right now and that's very, very hard," Hyde said. "Our guys are not quitting, and I give our guys credit for that. This is challenging."

Yarbrough (7-4) followed opener Louis Head to start the second inning and gave up one hit in his first appearance since Aug. 6.

"It was amazing how efficient he was and how good his stuff was," Rays manager Kevin Cash said. "Just awesome."

Yarbrough, who was vaccinated, tested positive after experiencing cold-like symptoms while the Rays were in Baltimore from Aug. 6-8.

"It's great to be able to be back with everybody now," Yarbrough said. "Definitely a great day to start it off with today."

Yarbrough was able to stay in shape throwing into a net.

"It was just one of those breakthrough cases," Yarbrough said. "At the same time I'm very glad with how my body responded to it."

The Rays went ahead to stay with two runs in the fourth against Spenser Watkins (2-5). Brandon Lowe singled in Joey Wendle with two out. Lowe then stole second and scored on Wander Franco's double.

Tampa Bay opened a 7-2 lead with three runs in the sixth. Franco had a run-scoring infield single, and Nelson Cruz and Austin Meadows each had a sacrifice fly.

The Rays designated right-hander Chris Ellis for assignment one day after he recorded his first big league win with four scoreless relief innings in his second career game.

Veteran reliever David Robertson, signed by the Rays on Monday, worked a scoreless inning for Triple-A Durham. The 36-year-old pitcher was on this year's silver medal-winning United States Olympic team.

Orioles: 1B Trey Mancini (calf) and OFs Anthony Santander (ankle) and DJ Stewart (knee) were out of the starting lineup. Santander popped out as a pinch hitter in the seventh. Hyde didn't rule out Mancini starting Thursday. ... RHP Hunter Harvey (right lat strain) allowed one run and three hits in one inning for Triple-A Norfolk.